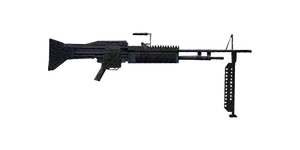 The M60 is a gas operated, belt-fed medium machine gun operating with a short-stroke gas piston. It is exclusively chambered to fire the 7.62×51 mm NATO round.

Providing every American squad with the ability to suppress enemy infantry effectively, the M60 serves as the standard-issue GPMG of U.S. military forces at the height of the Malden Islands Crisis.

Performance-wise, the M60 is almost identical to its Soviet-made counterpart and shares the exact same statistics as the latter. However, the M60 does feature less obstructive ironsights which makes it slightly more ergonomic to aim with.

But as is the case with the Soviet PK, wielding the M60 prevents the user from being able to carry a rocket launcher. Its extreme recoil also prevents sustained automatic fire, therefore it's recommended to fire the M60 in short bursts of 4-5 rounds to not only control its recoil better, but to also conserve ammunition.

The M60 only supports being fed from one "magazine". It requires two free inventory slots to carry: 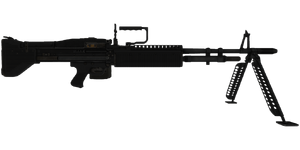 The M60 is used exclusively by U.S. military forces in ARMA Reforger.

Returning in Reforger, the M60 serves once more as the primary GPMG of U.S. machine gunners.

Unlike in Cold War Assault, the specs of Reforger's M60 has been sharply reduced. Its rate of fire is lowered to only 550 RPM and its muzzle velocity is now cut to 856 m/s. The M60's recoil remains as high as its predecessor, making it difficult to control while firing sustained bursts.

The M60 is unable to mount optical sights or suppressors but does support manual zeroing. Starting at a minimum of 300 m, it can be set to maximum zeroing of 1,100 m (any adjustments are made with increments/decrements of 100 m).

Mounted onto an M122 tripod, the M60 - Tripod is a turret-mounted version of the handheld M60 GPMG.

By default, static M60s are pre-stocked with two reserve magazines. Rearming the turret is possible by placing additional belts into the turret's "inventory", though no further magazines can be added if the turret already possesses two in reserve.

The M122 permits the user to swivel the M60 up to a maximum of 45 degrees in either direction horizontally. For vertical limits, it can be elevated up to 53 degrees but is restricted to a depression of only 21 degrees.

Both the handheld and static M60 can load two types of magazines:

Standard 100-round linked belt consisting of a mix of M80 ball and M62 tracer rounds.

Every fifth round fired consists of a visible tracer. The last six rounds of the belt will comprise exclusively of tracers.

This magazine weighs and occupies the same amount of space as the standard 7.62 mm belt.

Static version of the M60.