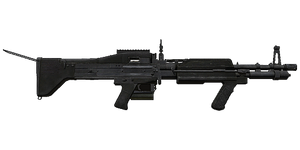 The M60E4 is a 7.62 mm general-purpose machine gun used exclusively by Czech special operations units in ArmA 2. It was added with the release of the Operation Arrowhead expansion pack.

The M60E4 is a gas operated, belt-fed medium machine gun operating with a short-stroke gas piston that is chambered to fire the 7.62×51 mm NATO round.

It loads from the same 100-round belts boxes used by the M240, and is able to attain a fire rate of up to 698 rounds per minute with a muzzle velocity of 900 m/s. The M60E4 has an integrated (non-functional) bipod but otherwise cannot be fitted optical sights, muzzle attachments, or side rail accessories. It has a maximum zeroing range of up to 800 metres.

Primarily wielded by operatives of the 601st SFG, the M60E4 serves as the alternate counterpart to the UK-59 issued to conventional Czech forces.

Like the UK-59, the M60E4's 7.62 mm ammunition has a high damage output and can incapacitate or outright kill most infantry targets in one hit. Though it lacks optics, the M60E4 is more than capable of suppressing and striking enemies at distances of up to 900 metres.

The M60E4's two main downsides are its bulky size and weight as well as its low rate of fire. The former makes it difficult to wield in close quarters as the weight of the M60E4 drastically increases the user's inertia (the UK-59 isn't as strongly affected as much as the M60E4).

In the case of the latter, both the American M240 and British L7A2 MMGs have fire rates exceeding 800 rounds per minute, whereas the M60E4 is far slower and caps out at roughly ~ 697 rounds per minute instead.

The M60E4 is limited to feeding from one type of "magazine" only. It requires two free inventory slots to carry: