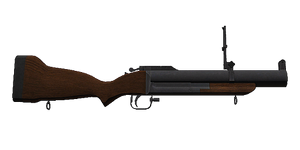 The M79 is a 40 mm grenade launcher that remains unused by any faction in ArmA 2. It was added with the release of the Operation Arrowhead expansion pack.

The M79 is a single-shot grenade launcher with a break-action operation. It is designed to fire 40 mm grenade rounds.

It can only load individual 40 mm grenade rounds also shared by rifle-mounted underbarrel grenade launchers. It has a maximum fire rate of up to 120 rounds per minute, and uses a folding ladder leaf sight that is accurate up to a maximum distance of 375 metres.

The M79 can load several types of grenade rounds with different kinds of warheads, ranging from basic high-explosive (HE), to coloured smoke, as well as flare shells for illumination and signalling purposes.

Like all single-shot grenade launchers the M79 must be reloaded after every shot, which significantly limits its fire rate. In addition, the operator is restricted to carrying an absolute maximum of eight grenades at all times (unless they choose to bring a backpack), which simultaneously prevents them from being able to carry magazines for a sidearm.

To make matters worse, the M79 is treated as a primary weapon but uses ammunition that occupies secondary weapon slots. On top of preventing the use of a sidearm since all of the slots are taken up by the M79's grenades, this prevents the user from being able to defend themselves if enemies get inside the M79's minimum range or if they run out of ammunition; whichever occurs first.

Needless to say, all these factors combined contribute to the M79 being a completely redundant weapon regardless of the situation. There is little reason to wield the M79 unless there's no alternative to using it.