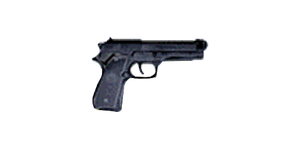 The 92F is primarily used by U.S. military forces as well as in limited numbers with the Nogovan Partisans in ArmA: Cold War Assault.

The 92F is a semi-automatic pistol that is chambered to fire the 9×19 mm round.

It loads from 10-round magazines and can attain a fire rate of up to 600 rounds per minute, with a muzzle velocity of 380 m/s.

The 92F served as the service pistol of the U.S. Armed Forces at the height of the Malden Islands Crisis, as well with the Nogovan Partisans who received covert shipments of American arms during the Soviet occupation of Nogova. Unlike its Soviet counterpart, the 92F is slightly more accurate and can be effectively used to engage targets at distances of between 25 and up to 50 metres.

A downside of the 92F is its usage of the 9 mm cartridge however, which is weaker than that of the TT-33's 7.62 mm round. It requires several body shots to put down a target, and is also not available in a suppressed sub-variant like the Glock 17, which makes it ill-suited to bring on stealth missions. Coupled with its already short maximum range, the 92F is best left to be used as a last resort.

The 92F only supports one magazine type. It occupies one inventory slot:

10-round magazine loaded with 9 mm ammunition. Does not contain any tracers. 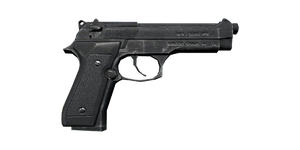 The M9 is used by both U.S. Army and RACS forces, as well as in limited numbers with Black Element PMCs in ArmA: Armed Assault.

The M9 returns from Cold War Assault, and remains as a semi-automatic handgun chambered to fire the 9×19 mm round.

It now loads from 15-round magazines and can attain a fire rate of up to 600 rounds per minute, with a muzzle velocity of 360 m/s. The M9 features a sub-variant with a muzzle suppressor attached.

Unlike its SLA equivalent, the M9 has a larger magazine capacity (15 rounds versus the Makarov's 8) and fairly easy-to-use sights. It is generally accurate up to a distance of 50 metres, though in practice this can often extend out to a maximum range of 75 metres depending on the operator's proficiency. 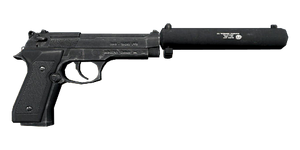 The M9 SD is a suppressed variant of the baseline M9 pistol.

It is similarly chambered to fire the same 9×19 mm round as its parent counterpart but can also be loaded with special subsonic ammunition. The magazines are interchangeable between both weapons.

In terms of performance, the M9 SD has a lower muzzle velocity of 320 m/s and a reduced effective range of just 20-35 metres instead. It is otherwise virtually identical to its parent in all other aspects.

Both variants of the M9 support being loaded with two types of magazines. They each occupy one inventory slot apiece:

15-round magazine loaded with regular 9 mm ball ammunition. Does not contain any tracers. 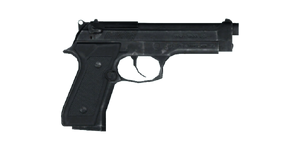 The M9 is primarily used by U.S. Marine/U.S. Army forces, as well as with ION PMCs in ArmA 2.

Returning from Armed Assault, the ArmA 2 M9 remains virtually unchanged and continues to serve as the standard-issue sidearm of both U.S. military forces and private contractors.

It still loads from 15-round magazines and has an identical fire rate. Its muzzle velocity has now been increased to 398 m/s but still cannot mount any accessories. Once more, a suppressed sub-variant is also available for use.

The M9 serves as the standard-issue sidearm of the U.S. military and ION mercenaries. As in Armed Assault, the ArmA 2 M9 is identical to the Makarov pistol accuracy-wise and only has an effective firing range of 50 metres. 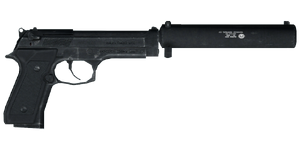 The M9 SD is simply the suppressed version of the regular M9 handgun.

Unlike in Armed Assault, the M9 SD is now unable to load non-subsonic magazines. The magazines are not interchangeable between either variant.

Unsuppressed M9s support being loaded with two types of magazines. However, the M9 SD is restricted to loading 9 mm SD magazines; it cannot be loaded with non-SD magazines. Both occupy one inventory slot:

15-round magazine loaded with regular 9 mm ball ammunition. Does not contain any tracers. 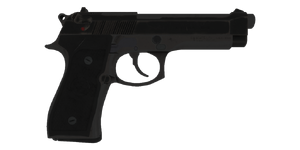 The M9 is used exclusively by U.S. military forces in ARMA Reforger.

The M9 returns in Reforger as the standard-issue service pistol of U.S. military personnel.

Compared to its predecessor in ArmA 2, Reforger's M9 has been downgraded slightly with reductions to both its muzzle velocity (~ 344.35 m/s) and fire rate (500 RPM). Furthermore, M9s can no longer be suppressed and the sights do not support manual zeroing.

Its effective firing range remains unchanged and is only useful for engaging targets at distances of under 50 metres.

The M9 can only load one type of magazine:

Standard 15-round magazine loaded M882 ball ammunition. Does not contain any visible tracers.