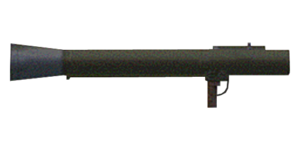 The Carl Gustav is a portable, anti-tank recoilless rifle. It is designed to launch unguided 84 mm rockets.

It can load rockets fitted with high-explosive anti-tank (HEAT) warheads, and has a maximum effective range of approximately ~ 600 metres. The Carl Gustav is equipped with an optical sight that has a magnification strength of 1.5x.

The Carl Gustav serves as the heavy AT weapon counterpart to the lighter M72 LAW rocket launcher used by U.S. forces.

Unlike the M72 LAW, the Carl Gustav's damage output is much greater due to its larger warhead. It can easily destroy Soviet medium tanks like the T-72 in a single hit. Even heavy tanks like the T-80 are not completely safe from the Carl Gustav, and can be disabled from just one rocket; a second will usually outright destroy it.

Its only real downside stems from its excessive weight as rockets occupy up to six inventory slots at once. This in effect restricts the user to firing only one rocket per engagement - assuming that they can't resupply in the field. The M72 LAW on the other hand, only takes up two slots per rocket, and allows the operator to carry up to three while having the same amount of room to spare for their primary weapon (at the cost of each rocket being less powerful).

Nonetheless, its raw firepower more than makes up for this drawback. When used in an entrenched position with a supply crate of rockets nearby, a small group of Carl Gustav operators can bring an enemy tank formation to grinding halt.

The Carl Gustav is only capable of loading one type of rocket. Each rocket requires six free inventory slots:

Rockets are always launched with an initial velocity of 30 m/s. They take a further 1.5 seconds to reach a maximum speed of 200 m/s in mid-flight. The warhead itself has a blast radius of 2.5 metres. 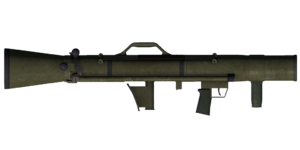 The MAAWS is an 84 mm rocket launcher used by both the U.S. Army and Czech military forces in ArmA 2. It was added with the release of the Operation Arrowhead expansion pack.

The MAAWS is a portable, anti-tank recoilless rifle that is designed to load and fire unguided 84 mm rockets.

It essentially fills the gap between the U.S. Army's lighter and weaker rocket launchers, while being less bulky and more versatile than its guided ATGM launchers.

Unlike its outdated Cold War-era predecessor, the ArmA 2 MAAWS has the ability to load high-explosive dual purpose (HEDP) munitions in addition to its standard HEAT rockets; with the former's warhead having a larger blast radius that makes it useful against light-medium armoured vehicles as well as groups of infantry.

When compared to its USMC counterpart, both it and the MAAWS are fitted with magnified optical scopes (the MAAWS scope has a magnification strength of 3x).

However, the U.S. Army's MAAWS has a slightly higher effective firing range of up to 700 metres as opposed to the approximate 500-550 metre limit of the former.

But like the SMAW, the 84 mm HEAT rocket used by the MAAWS is generally not too effective at taking out the latest Russian-made Main Battle Tanks; the T-90 being a prime example. It is however, sufficient against softer-skinned vehicles like the BTR-90 Infantry Fighting Vehicle as well as older, less well-protected MBTs such as the T-72.

The ArmA 2 MAAWS can load and fire two types of rockets. Both require three inventory slots to carry (regardless of warhead type):

Comparable to the HEAA rocket used by the SMAW, the MAAWS' HEAT rocket is mostly identical and is designed with piercing through the armour of heavy IFVs in mind. It is also useful for destroying large structures that are armoured or would otherwise be impervious to smaller explosives.

While it still isn't as powerful as dedicated ATGMs like the Javelin, the HEAT rocket still packs more than enough of a punch to destroy anything that isn't a T-90. Since the warhead isn't designed to be used against anything other than vehicles and structures, it has a tiny splash radius that will barely have any effect on a group of infantry targets unless the gunner lands a direct hit.

The HEAT rocket has an effective range of up to 700 metres and an absolute maximum of 900 metres. It has an initial velocity speed of 250 m/s and a top in-flight speed of 750 m/s. The warhead has a blast radius of just 1.2 metres.

Just like the SMAW's HEDP rocket, the warhead for the MAAWS' HEDP rocket is designed to be a multi-role munition that can be used against vehicles and infantry alike. It has a slightly bigger splash radius compared to the regular HEAT rocket, and can be used to bring down non-fortified structures rather quickly after two to three direct (or indirect) hits.

Its penetration power is greatly reduced compared to the regular HEAT rocket, however, so it should not be employed against anything other than light-medium armoured vehicles like the BTR-90 or Vodnik.

HEDP rockets have an effective range of up to 700 metres and an absolute maximum of 900 metres. It has an initial launch velocity of 250 m/s and can reach speeds of up to 750 m/s mid-flight. The warhead has a blast radius of 12 metres. 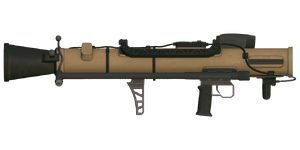 The MAAWS Mk4 Mod 1 is an 84 mm rocket launcher used by both NATO forces and the Livonian Defense Force, as well as in limited numbers with CTRG operators in ArmA 3. It was added with the release of the Tanks DLC.

It can load either HEAT 75 high-explosive anti-tank (HEAT) or HE 44 high-explosive (HE) rockets. Its optical sight is night vision-capable, and has ballistic markings that are accurate to distances of up to 1,000 metres. The launcher's optical sight cannot be manually zeroed by the operator, but has an integrated laser rangefinder. The front end of the launcher's barrel also has a side rail that supports flashlights and laser pointers.

Essentially NATO's answer to the CSAT RPG-42, the Mk4 is designed to be a rugged medium anti-tank launcher that can complement the heavier PCML. Compared to its CSAT counterpart, both weigh the same, have almost identical munitions that can be loaded (at least in terms of the types of available), and a similar firepower output.

The main difference with the Mk4 is that it is available in two variants; the older Mod 0 model which is wielded by both the AAF and FIA rebels, and the newer NATO-exclusive Mod 1 model.

While similar to the RPG-42 in many aspects, the Mk4's main advantage lies in its optical sight. The Mod 1 has reticle markers but also utilises a built-in laser rangefinder, which trivialises the need to estimate the distance of a target. Combined with the ability to toggle a night vision mode, this makes the Mk4 one of the most advanced (albeit unguided) AT launchers in-game. 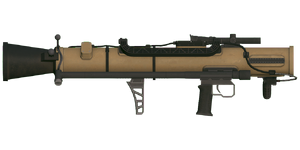 The MAAWS Mk4 Mod 0 is simply an older model of the newer Mod 1 launcher. Unlike the NATO-exclusive Mod 1, the Mod 0 is only wielded by AAF troopers and in limited numbers with FIA guerillas.

It is almost identical both visually and performance-wise to the Mod 1 and also loads the same munitions. The most obvious change between the two is the optical sight; the Mod 0's conventionally-designed scope does not possess the advanced fire control system of the Mod 1.

Though the scope's reticle also relies on drop compensation markers (that are accurate up to a distance of 1,000 metres in 200 metre increments), the scope itself does not have a laser rangefinder. This requires the operator to estimate the approximate distance of their targets in order to land a hit, which can be difficult if the target vehicle is moving quickly.

Likewise, it is also incapable of toggling night vision which makes it somewhat inferior to the RPG-42 when bringing it onto missions that take place in low-light conditions.

Both Mod 0 and Mod 1 variants are available in the following finishes:

Both variants of the MAAWS Mk4 are capable of loading and firing three types of rockets. The modernised HEAT 75 munition weighs 60 "mass" while its older counterpart (HEAT 55) weighs 50 "mass". Only the anti-infantry HE 44 munition weighs a total of 40 "mass":

The Mk4's HEAT rocket can inflict the same amount of base damage as the RPG-42's PG-42V grenade. The difference with the Mk4's HEAT is that its splash radius is slightly smaller and also flies significantly faster.

The tandem nature of the shaped charge warhead means that it can be used to some effect against slat cages on armoured vehicles. The initial blast will usually destroy the cage while the penetrator will bypass through to the vehicle's actual armour.

It is still recommended to destroy the cage first with a HE 44 rocket however, so as to maximise the chances of the penetrator successfully cutting through the vehicle's main armour and inflicting more damage.

The HEAT rocket has an effective range of up to 700 metres and an absolute maximum of 1,000 metres. It is always launched with an initial and maximum velocity of 350 m/s. The warhead has a blast radius of 3 metres, whilst the kinetic submunition has a launch velocity of 1,000 m/s and a penetration depth of ~ 499 millimetres.

Like the RPG-42's TBG-42V grenade, the HE 44 rocket is an anti-personnel munition that lacks a penetrator and can only be used against infantry. Its splash radius is practically identical to that of the TBG-42V and deals the same amount of damage as well.

The main difference is that the Mk4's HE rocket has a greater initial launch velocity speed and will fly much faster post-launch. This lets it strike groups of infantry targets at a distance of up to 1,000 metres (theoretically). However, it should be noted that this still depends on the elevation of the user's current position since the rocket will usually lose most of its velocity after ~ 620 metres.

HE 44 rockets have an effective range of up to 700 metres and a near maximum of 1,000 metres. It has an initial and maximum velocity of 350 m/s. The warhead has a blast radius of 6 metres.

Damage-wise, the HEAT 55 inflicts slightly less damage compared to the modernised HEAT 75 rocket. In all other aspects (i.e. range and velocity) the HEAT 55 remains unchanged, though the kinetic submunition has a lower penetration depth of only 400 millimetres.