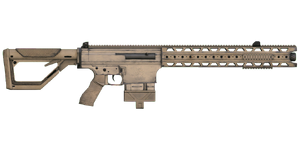 The MAR-10 is a .338 marksman rifle used by both CTRG sharpshooters and in limited numbers with Mediterranean NATO forces in ArmA 3. It was added with the release of the Marksmen DLC.

The MAR-10 is a piston driven, semi-automatic marksman rifle chambered to fire the .338 Lapua Magnum round.

It loads from 10-round box magazines, and can attain a fire rate of up to 250 rounds per minute with a muzzle velocity of 915 m/s. It accepts accessories on all three of its rails; top, side, underbarrel, and also suppressors fitted to its muzzle.

Performance-wise, the MAR-10's damage output is somewhat underwhelming at close and medium ranges due to using a smaller-sized cartridge compared to its CSAT counterpart (8.6 mm versus 9.3 mm).

But consequently, the MAR-10 has a better ballistics model as it retains much of its power regardless of distance. This is in contrast to the Cyrus, which suffers from a significant damage drop-off for targets beyond 700 metres.

When it comes to accuracy, the MAR-10 is fairly precise and can be used to take out targets at ranges of up to 1,000 metres with little-to-no dispersion. In that aspect, it is almost on par (though not quite the same) with sniper rifles like the M320 LRR, making it perfectly suited for use in sniper engagements as opposed to short range firefights.

The MAR-10 only accepts a single magazine type. It has a "mass" value of 14 units:

Box magazine loaded with .338 Lapua Magnum rounds. Does not have any visible tracers loaded.