The MB 4WD is a compact Sport Utility Vehicle commonly used by both Tanoan and Altian civilians, IDAP aid workers, Syndikat rebels and their L'Ensemble successors in ArmA 3. It was added with the release of the Apex DLC.

Features
It is available in three variants, the standard transport that is unarmed and is designed purely for civilian use, an armed variant that has a LIM-85 5.56 mm light machine gun fitted to a pintle that's mounted onto the top of the roll cage, and a second armed variant that has an SPG-9 73 mm recoilless rifle (also attached to the roll cage).

The compact size and light weight of the MB 4WD also allows it to be airlifted by aircraft as well; either internally or via slingloading. Though the baseline MB 4WD variant does not retain any armament, all passengers are able to fire their own weapons out of it.

Mobility
The MB 4WD has very good handling while driving on rough terrain, and can accelerate rapidly both on- and off-road.

Drawbacks
Just like its non-SUV counterpart, the MB 4WD is a civilian vehicle and naturally does not possess armour plating. Some variants even have both passenger doors and the roll cage removed, which means that the driver and passengers are equally vulnerable to small arms fire.

Crew Capacity
The MB 4WD has a seating capacity of up to four passengers. This includes the driver, and up to three passengers who sit on the front-right seat and in the rear. Armed variants only have a maximum capacity of three, as the rear two seats are occupied by the gunner. 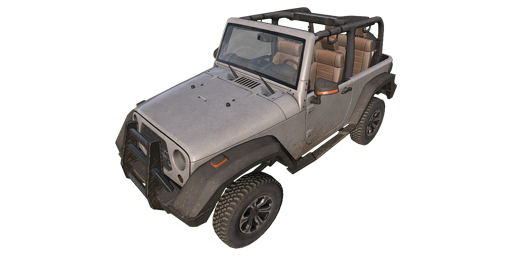 Baseline transport-only variant. It is unarmed and can carry up to three passengers at a time. 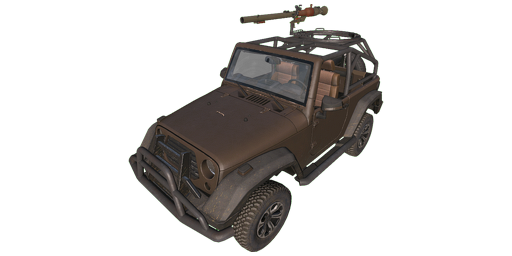 Armed with an SPG-9 73 mm recoilless gun that is mounted onto a pintle fixed to the top of the roll cage. The SPG-9 has access to 12 PG-9N high-explosive anti-tank (HEAT) and 8 OG-9VM high-explosive (HE) rounds.

It can only transport a single passenger who sits in the front right seat. 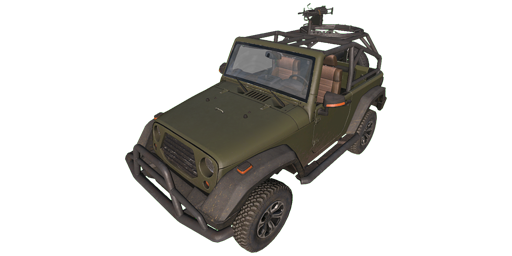 Identical to the AT variant but is armed with a LIM-85 5.56 mm light machine gun instead.

The LIM-85 feeds from a single 200-round belt box and has a further two in reserve (for a total of 600 rounds). Transports the same number of passengers as the AT variant.

All variants of the MB 4WD have base armour values of 30. As civilian vehicles, they do not support being fitted with any additional armour modules.

Note that with the exception of the turret, weak point positions remain identical on both the MB 4WD (AT) and MB 4WD (LMG) variants.

The body on all MB 4WDs can survive just 30 points of damage. They take 150% increased damage from high-explosive (HE) type munitions.

At least 50% is shared with the MB 4WD's main "health" pool. Depletion of the body's integrity will not cause a catastrophic kill unless it is at critical status.

The engine can survive only 15 points of damage before failing. It takes 50% less damage from HE-type munitions, though 50% of incoming damage will be shared with the vehicle's main "health" pool.

It cannot cause a catastrophic kill by itself unless the MB 4WD is critically damaged.

If damaged: Reduces power output, acceleration is decreased and it may become impossible to climb uphill.
If destroyed: Instantly immobilises the MB 4WD.

The MB 4WD's fuel tank can resist up to 45 points of damage before rupturing. At least 50% of damage is shared with the vehicle's main "health" pool.

It takes 150% increased HE-type munitions. A destroyed fuel tank will not cause a catastrophic kill unless the MB 4WD is critically damaged.

All four wheels are able to resist up to 120 points of damage. They incur a 400% damage penalty to HE-type munitions, though no amount of damage is shared with the MB 4WD's "health" pool.

Destroying all four wheels will be needed to immobilise the vehicle. Depending on which and how many are remaining, it is entirely possible for MB 4WDs to continue driving with two out of four tyres missing (though making simple manoeuvres will be near-impossible).

The gunner controls any weapons mounted onto the turret ring on armed variants:

NOTE: Only available on the MB 4WD (AT) variant.

For optics, the SPG-9's sight uses a fixed magnification zoom. The gun itself is forward-facing, but can be vertically rotated 5 degrees down and 14 degrees up.

It does not have an integrated Fire Control System but can be manually zeroed starting at a minimum distance of 100 m up to a maximum of 1500 m. It rises in 100 m increments until 400 m, at which point it jumps to 600 m and continues incrementing in 200 m steps until 1200 m after which it skips directly to 1500 m.

NOTE: Only available on the MB 4WD (LMG) variant.

The LIM-85 has a muzzle velocity of 915 m/s and has a variable rate of fire depending on its fire mode:

It does not have an optical sight. The gun itself is forward-facing but can be vertically rotated up to a maximum of 18 degrees up and minimum of 10 degrees down. Like the SPG-9, the LIM-85 also lacks an FCS and can only be manually zeroed by the gunner. Zeroing limits remain the same as the SPG-9.

Interior view of the dashboard.

Community content is available under CC-BY-SA unless otherwise noted.