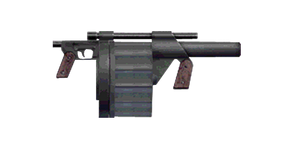 The MM-1 is a revolver-type grenade launcher with a double-action operation. It is designed to fire 40 mm grenade rounds.

It loads from 12-round cylinders and is limited to a fire rate of up to 120 rounds per minute only. The MM-1 has an effective firing range of between 150 and up to a maximum of 350 metres.

The MM-1 was the primary multiple-shot grenade launcher utilised by U.S. forces during the Cold War.

With good aim, it can be used to suppress and annihilate entire platoons of enemy infantry at distances of up to 350 metres. Even light vehicles are not safe, and can find themselves damaged (if not outright destroyed) from a quick barrage by an MM-1 operator.

Compared to its Soviet counterpart, the MM-1's "magazine" capacity has exactly double the amount of total grenades. This means that the operator doesn't have to reload and can continuously fire without interruption. The only caveat however, is that they cannot "reload" after depleting all twelve grenades due to each cylinder occupying eight inventory slots apiece; preventing the user from being able to carry any spare "magazines".

While it has enormous destructive potential, the MM-1 is also severely hampered by its poor (or rather lack of) aiming sights. Unlike the Soviet 6G30, the MM-1 does not have a flip-up ladder sight and relies solely on the user's ability to estimate the range of their targets and adjust their "aim" accordingly.

The MM-1 is restricted to loading one type of "magazine" only; a 12-round grenade cylinder. These "magazines" require a total of eight free slots to carry:

12-round cylinder loaded with twelve high-explosive (HE) grenades.

Grenades are always fired with a muzzle velocity of 60 m/s. They have a blast radius of 7 metres.