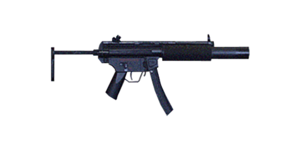 The MP5SD3 is a selective-fire, roller-delayed blowback submachine gun that operates from a closed bolt design. It is chambered to fire the 9×19 mm cartridge.

It loads from 30-round magazines and can attain a fire rate of up to 800 rounds per minute, with a muzzle velocity of 400 m/s. The MP5SD3 is fitted with a (non-functional) flashlight and uses an integrated sound suppressor.

The MP5SD3 is one of the two suppressed firearms wielded by U.S. special forces units, and is the direct American counterpart to the PP-19 Bizon submachine gun used by the Soviet Spetsnaz. The MP5SD3 is designed with an integrated sound suppressor that causes it to be extremely quiet to fire; making it ideal to bring on stealth missions.

In terms of performance, the MP5SD3 has little recoil even when firing on full auto and has decent accuracy at distances of up to 200 metres. Compared to the Soviet Bizon SMG which has very low stopping power even at close ranges, the MP5SD3 is able to kill just as efficiently as the UZI, requiring only 3-4 rounds to take down a target at almost any range.

However, the MP5SD3 does sacrifice some stopping power in exchange for being silent. This is due to firing a slower round and a low muzzle velocity, which is what also limits its range to a maximum of 200 metres.

The MP5SD3 only supports one magazine type. It occupies one inventory slot: 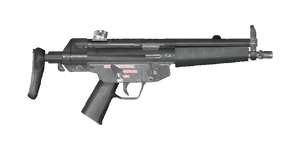 The MP5A5 is used by both U.S. Army and RACS military forces in ArmA: Armed Assault.

The MP5A5 is a modernised counterpart of its Cold War-era predecessor.

It continues to use 30-round curved magazines but can now achieve a maximum fire rate of up to 856 rounds per minute, with a muzzle velocity of 400 m/s.

A lightweight and compact weapon to carry, the MP5A5 served as the primary weapon of American and South Sahranian pilots and crewmen. Due to its small size and relative inconspicuousness of its 9 mm round, the MP5A5 is easy to wield in close quarters and difficult to hear being fired.

However, all of these upsides also come with many drawbacks; namely reduced stopping power and pitiful effective firing range. The 9 mm round (both regular and subsonic) are quite lacklustre and suffer significantly from damage drop-off beyond 150 metres.

The MP5A5's ironsights are also quite cumbersome to aim with and are only zeroed for targets at distances of up to 50 metres, which is about the same as the maximum firing range of both the M9 and Makarov pistols. Needless to say, the MP5A5 should be avoided in favour of 5.56 mm/5.45 mm carbines like the M4A1 or AKS-74U instead. 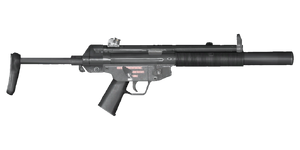 The MP5SD6 is a modified variant of the baseline MP5A5.

Unlike its parent, it uses an integrated sound suppressor and has a lower muzzle velocity of just 320 m/s. Although the MP5SD6 is chambered to fire the same 9×19 mm round, it is intended to use special 9 mm magazines which have a reduced muzzle velocity.

In all other aspects however, the MP5SD6 remains unchanged from the MP5A5.

Both variants of the MP5 support being loaded with two types of magazines. They each occupy one inventory slot apiece:

30-round curved magazine loaded with regular 9 mm ball ammunition. Does not contain any tracers. 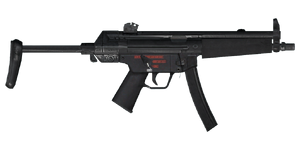 The MP5A5 is used exclusively by the U.S. Marines in ArmA 2.

Returning from Armed Assault, the MP5A5 remains largely unchanged from its predecessor.

It retains the same rate of fire and muzzle velocity, but now features the ability to load different types of magazines on top of its usual curved ones (of both pistol and SMG variety). The MP5A5 does not support being fitted with any accessories, but does come in a separate variant that is fitted with an integral sound suppressor instead.

The MP5A5 served as the primary personal defence weapon of USMC helicopter crews during the events of Operation Harvest Red. Excelling in close quarters, the MP5A5 has a decent good rate of fire, accuracy, and low recoil, though it has little stopping power owing to its usage of the 9 mm cartridge.

Unlike the Russian Bizon SMG however, the MP5A5 suffers from having obstructive ironsights that make it more difficult to aim at distant targets. Its smaller magazine size of just 30 rounds versus the Bizon's 64, also makes it less forgiving to use in close quarters compared to its Russian counterpart, as the latter will not need to be reloaded as often as the MP5A5.

In addition, the Bizon is more efficient inventory-wise as up to 768 rounds can be carried by the operator whereas the MP5A5 can only carry a maximum of 360; less than half of what a Bizon user can carry. 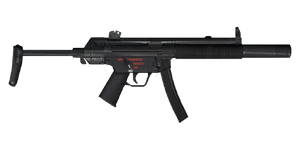 The MP5SD6 is a modified variant of the baseline MP5A5. Unlike its parent, it is fitted with an integral sound suppressor for use in stealth missions.

Like in Armed Assault, the MP5SD6 is intended to feed from special 9 mm magazines. Unlike before however, the magazines are no longer interchangeable with each other (the MP5SD6 cannot load non-SD MP5A5 magazines).

Aside from its lower muzzle velocity of 320 m/s and the integrated suppressor making it even more quieter to use, it is virtually identical to its parent in every other way.

Regular MP5A5s are capable of loading up to seven types of magazines, though MP5SD6s are limited to only three of them. They each occupy one weapon inventory slot:

Standard 30-round curved magazine. Does not contain any visible tracers.

Curved magazine intended specifically for use with the MP5SD6. Rounds fired from this magazine specifically have a lower muzzle velocity of 320 m/s.

30-round box magazine intended for use with the PDW. Remains identical in all other aspects.

Box magazine intended for use with the PDW SD that's loaded with specialised subsonic ammunition.

Rounds fired from this magazine have a lower muzzle velocity of 320 m/s. It is otherwise identical to regular PDW magazines.

This magazine can be loaded by the MP5SD6.

17-round pistol magazine used by the G17. Rounds fired from this magazine have a lower muzzle velocity of 360 m/s.

This magazine can be loaded by the MP5SD6.