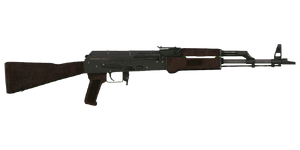 The MPi KM-72 is a 7.62 mm assault rifle used exclusively by East German special operations units and borderguards in ArmA 3. It was added with the release of the Global Mobilization - Cold War Germany Creator DLC.

The KM-72 is a selective-fire assault rifle chambered to fire the 7.62×39 mm cartridge. It uses a gas operation with a rotating bolt.

It primarily feeds from 30-round curved magazines but can also load 75-round drums utilised by the LMG RPK. It has a muzzle velocity of 715 m/s, and can reach fire rates of up to 600 rounds per minute. The KM-72 can be fitted with either optical scopes or night sights and bayonets, but is unable to mount any sound suppressors.

Manufactured in East Germany, the KM-72 is a locally produced variant of the Soviet-made AKM rifle. Performance-wise, it is essentially the East German equivalent of the G3 battle rifle, with both weapons having fairly high recoil when firing rapidly and having similar effective firing ranges of ~ 520 metres.

As with the AKM however, the KM-72 suffers from greater dispersion and isn't nearly as accurate as the G3 against distant targets. Likewise, the KM-72 has no ability to make use of rifle grenades or fire explosive rounds from an underbarrel grenade launcher.

When it comes to handling, the KM-72's recoil can be quite difficult to control during fully automatic fire. As such, it should be fired on semi rather than full auto, and only in short bursts of 2-3 rounds. 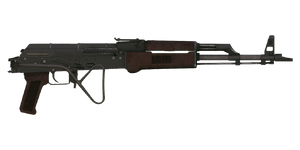 The MPi KMS-72 is a slightly modified configuration of its parent weapon.

Unlike regular KM-72s, the KMS-72 utilises a side-folding stock as opposed to a fixed one. It is also just slightly lighter to carry, weighing ~ 3 "mass" less than the KM-72.

There are no other functional differences compared to the baseline KM-72.

NOTE: Both the KM-72 and KMS-72 are capable of loading the same magazines utilised by non-Global Mobilization 7.62 mm-chambered weapons. To minimise clutter, they are deliberately excluded from this section.

All variants of the KM-72 are intended to feed from five types of 30-round magazines, though they can also accept being fed with five types of 75-round drums shared with the LMG RPK.

Tracer magazine. Loaded with 30 rounds worth of visible green tracers.

It also does not contain any visible tracer rounds. It is statistically identical to regular 30-rounders.

75-round drum used by the RPK light support weapon.

Loaded with 75 rounds worth of visible green tracer ammunition.

It is statistically identical to regular 75-rounders.