The MQ-4A Greyhawk / K40 Ababil-3 is a fixed-wing Unmanned Combat Aerial Vehicle used by both NATO and Mediterranean CSAT forces, as well as in limited numbers with the AAF in ArmA 3.

The Greyhawk is a medium-altitude, long-endurance aerial drone that can serve a variety of roles from surveillance to ground attack, and even air-to-air combat.

Armament
It has two pylons in total with one on each wing (1-2) that support dynamic loadouts. Each pylon can be fitted with any of the following:

NOTE: The following munitions only apply to the CSAT K40 Ababil-3:

By manually taking control of the drone, the integrated laser designator can also be used to guide some of its own weapons such as DAGR rockets or precision bombs like the GBU-12. This also enables the Greyhawk to act in a forward air control role to mark targets for other aircraft.

Features
Its main advantages over the MQ-12 and the smaller KH-3A are that it can loiter for slightly longer periods of time over an area, and is also able to carry heavier munitions instead of being restricted to just missiles and rockets.

The other upside is its low-observability. Because of its minimalist design, the Greyhawk is particularly difficult to spot electronically and can remain invisible (electronically) from most airborne sensors; so as long as it remains at a low enough flying height or above ground clutter.

Drawbacks
Being a fixed-wing UCAV as opposed to a rotary-wing helicopter, the Greyhawk isn't as easy to use for laser marking ground targets from the air. It is also incapable of STOL take-offs and landings in stark contrast to the KH-3A while also lacking the agility of the MQ-12. 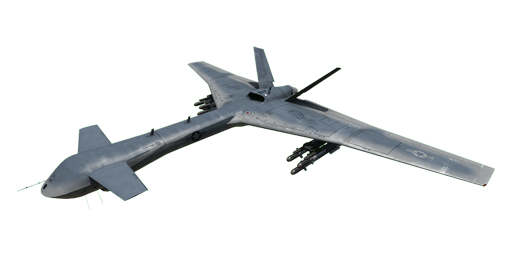 It supports dynamic loadouts and can be changed to load other types of munitions. 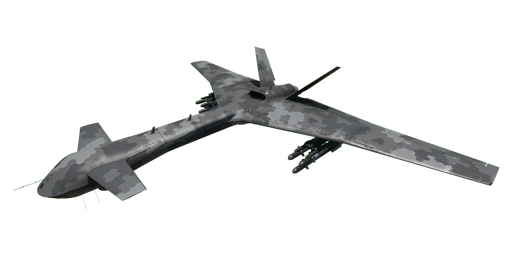 Identical in capability/armament to the baseline MQ-4A Greyhawk but exclusive to Mediterranean CSAT forces only. 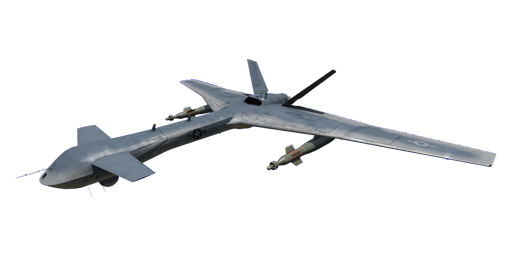 Similar to the baseline variant, this version also supports dynamic loadouts but is otherwise armed with twin GBU-12 laser guided bombs by default instead. 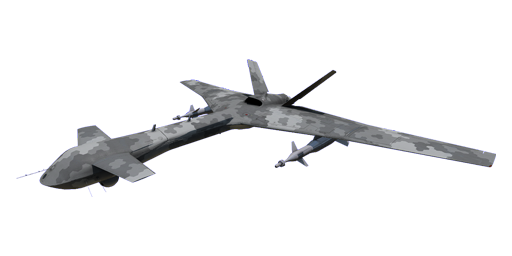 Identical to the CAS variant of the NATO Greyhawk.

This variant simply eschews GBU-12s on the NATO variant in favour of carrying LOM-250G bombs.

It should be noted that all of the patterns are not meant to help camouflage the Greyhawk/Ababil-3 into the ground from the air, but rather to blend it into the sky from the ground.

The hull can resist 60 points of damage. 50% of damage is always transferred onto the drone's "health" pool.

It takes 500% increased damage from high-explosive (HE) type weapons.

The engine can only incur 30 points of damage before failing. 50% of damage will be transferred onto the drone's "health" pool. The engine always takes 200% increased damage from HE-type weapons.

The fuel tank can only take 60 points of damage before rupturing. 50% of damage will be transferred onto the drone's "health" pool. It takes 400% increased damage from HE-type weapons.

If damaged: Causes fuel to gradually leak, up to 50% of the tank's current capacity.
If destroyed: Entire fuel tank will be depleted over several seconds.

All six components can resist 30 points of damage before failing (individually). They take 300% increased damage from HE-type weapons.

Depending on which specific control surface is hit, the drone's handling and agility will be degraded based on the severity of the component's damage.

The Greyhawk's moderately-sized airframe grants it semi-stealth capability in all aspects. It is particularly difficult to track both visually and on infrared, and is next-to-impossible to spot on fighter radars assuming it remains above ground clutter:

The Greyhawk has a radar cross-section rating of 0.5, lowering the maximum detection range of opposing radars by half (50%).

The Greyhawk has reduced visibility on the infrared spectrum, and can only be spotted at 50% of an infrared-based sensor's maximum range (factor of 0.5; reduction of 50%).

The Greyhawk is 30% less visible to visual-based sensors, and can only be seen at 70% of the sensor's default range (factor of 0.7).

The Greyhawk has an array of sensors designed to allow it operate in ground attack missions:

The Greyhawk does not have an active radar as it doesn't utilise any radar guided ordnance.

IRST and visual sensors both have a maximum range of 3 km for aerial targets and 2.5 km against ground targets.

They have a minimum operating range of 500 m and an azimuth/elevation coverage of 51 and 37 degrees, respectively. Targets can only be tracked if they are moving at speeds of 180 km/h or less.

Both sensors are located in the targeting camera, and work independently of the Greyhawk's actual heading. Identity recognition locks in as soon as a target gets within 2 km range.

The RWR has a 360 degree detection radius and a maximum detection/target recognition range of 6 km.

NOTE: Only the weapons used on the default loadout for the Greyhawk are listed here. For full details on ordnance that can be mounted on the Greyhawk's pylons, refer to the dynamic loadouts article.

The Greyhawk's "gunner" AI controls all weapon systems mounted onto the wing hardpoints. The AI's camera pod has access to three fields of view which can also toggle a day, night or black-hot/white-hot thermal vision mode:

(*) The CSAT K40 Ababil-3 (CAS) model is not capable of arming itself with GBU-12s by default. They are only available on this variant specifically; it will not be possible to replace them if the user attempts to rearm the Ababil-3 with GBU-12s after editing its pylons via dynamic loadouts.