The MX series are a family of modular weapons used by both NATO forces and CTRG operatives in ArmA 3. 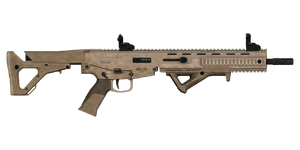 The MX is a 6.5 mm assault rifle used by NATO forces and in limited numbers with CTRG operators in ArmA 3.

The MX is a selective-fire assault rifle chambered to fire the caseless 6.5×39 mm NATO round. It is the baseline assault rifle model upon which all other MX variants are based on.

It loads from 30-round double-stack STANAG magazines, and can attain a fire rate of up to 625 rounds per minute with a muzzle velocity of 800 m/s. The MX accepts accessories on all three of its rails; top, side and underbarrel, while also being able to mount attachments onto its muzzle.

Constructed out of polymer, the MX is a lightweight rifle that serves as the service rifle of both Mediterranean and Pacific NATO forces. Compared to traditional 5.56 mm cased ammunition previously fielded by Western militaries, the caseless 6.5 mm round that it fires has increased stopping power and penetration.

In terms of accuracy, the MX is superior to most other weapons in its class, falling just short of the SPAR and Promet when it comes to absolute precision. Against its CSAT counterparts, however, it completely outmatches both rifles at any distance. This allows the user to hit targets with minimal dispersion at ranges of up to 400-600 metres away.

However, its main downside is its mediocre rate of fire which pales in comparison to the Katiba. Simultaneously, it suffers from greater recoil and muzzle climb while firing on any mode which makes it slightly harder to control on full auto. Though the MX's recoil is somewhat compensated by its excellent accuracy, the MX remains an overall more difficult weapon to handle. 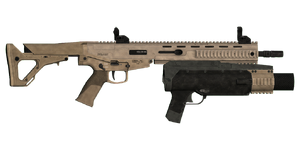 The MX 3GL is a 6.5 mm assault rifle used by NATO forces and in limited numbers with CTRG operators in ArmA 3.

The MX 3GL is simply a modified version of the baseline MX rifle with an underbarrel grenade launcher attached.

Like its parent weapon, the rifle itself fires the same caseless 6.5×39 mm NATO round whereas the 3GL underbarrel grenade launcher fires 40 mm grenades instead. These types of rounds range from high-explosive (HE) grenades to less-than-lethal (LTL) flare and non-lethal smoke shells.

It loads from the same 30-round magazines, and can attain a fire rate of up to 625 rounds per minute with a muzzle velocity of 800 m/s. The MX 3GL supports accessories on its top and side rails while also being able to mount attachments onto its muzzle. However, it cannot be fitted with bipods due to the UGL occupying the rifle's six o'clock rail.

The underbarrel grenade launcher has a quadrant sight with a red dot for the operator to aim with, which can be zeroed up to a maximum range of 400 m.

The MX 3GL shares the same strengths (and flaws) of its baseline model; the sole difference with this variant is its underbarrel-mounted 3GL grenade launcher. The 3GL is unique for being able to load not just one but up to three-round grenade "magazines" that can be fired in quick succession.

Altogether, these traits combined with its use of a red dot quadrant sight and weighing exactly the same as both of its CSAT counterparts, undisputedly makes the MX 3GL the best UGL-equipped assault rifle. 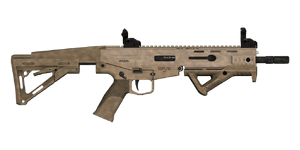 The MXC is a 6.5 mm carbine used by NATO forces and in limited numbers with CTRG operators in ArmA 3.

The MXC is a carbine variant of the baseline MX rifle.

It loads from the same 30-round magazines and has an identical maximum fire rate of 625 rounds per minute. It can still be fitted with accessories onto its top and side rails while also being able to mount attachments onto its muzzle, though it cannot be fitted with underbarrel accessories.

As a carbine, the MXC is suited for vehicle and aircraft crews to utilise due to its compact configuration. It does not face the inertial drawbacks associated with its longer-barrelled counterparts like the MXM or MX SW.

However, this also serves as one of the major flaws in the MXC's design; because it uses a shorter barrel, it subsequently suffers from a reduced muzzle velocity of only 720 m/s.

Though its accuracy still outstrips its Mediterranean CSAT counterpart, this significantly affects its precision at every other range. Lastly, this also limits the MXC's user to short distance engagements of 300 metres or less, as fired rounds will quickly lose their energy beyond that range. 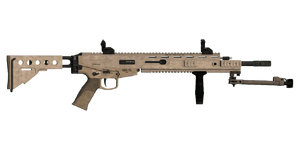 The MX SW is a 6.5 mm light support weapon used by NATO forces and in limited numbers with CTRG operators in ArmA 3.

The MX SW is a modified variant that uses a light support weapon configuration.

Unlike the baseline MX, it primarily feeds from 100-round casket-type magazines as opposed to 30-round STANAGs, though it can still optionally load the latter if required.

Its longer barrel gives it accuracy that is on par with the MXM marksman variant. Performance-wise, the MX SW is far superior to the baseline model due to its increased fire rate which averages at roughly ~ 750 rounds per minute (versus 625). It also retains a much higher muzzle velocity of 880 m/s thanks to its longer barrel.

Compared to its Pacific CSAT counterpart, the MX SW completely outclasses it in terms of accuracy. However since the MX SW shares the baseline MX's main drawback of a low fire rate, this still prevents it from being able to suppress as effectively as the CAR-95-1. 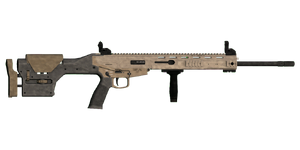 The MXM is a 6.5 mm designated marksman rifle used exclusively by NATO forces in ArmA 3.

The MXM is designed specifically to serve as a marksman rifle.

It still feeds from the same 30-round 6.5 mm caseless magazines and can accept attachments on all three rails along with muzzle attachments.

Thanks to its longer barrel, the MXM retains the highest muzzle velocity out of all the MX variants: an impressive 920 m/s in contrast to the baseline MX's 800 or even the MXC's meagre 720. This pushes the MXM's effective firing range to approximately ~ 800 metres, a distance that is traditionally the domain of heavier 7.62 mm-chambered DMRs.

Its main advantage also stems from being a fairly lightweight weapon to carry compared to said 7.62 mm DMRs. Most importantly, ammunition can be shared with (or obtained from) other members of the squad since it loads from the 6.5 mm STANAGs (provided that squad members are also using MXs).

In turn, this grants the MXM one particularly impressive feature: it is capable of loading the MX SW's 100-round stacked magazines which grants it the largest ammunition capacity out of all DMRs without a single compromise in performance. This is seventy rounds more than the Promet MR and eighty more than the CMR-76.

While the MXM naturally lacks the stopping power of 7.62 mm DMRs like the Mk18 ABR when it comes to defeating infantry with heavy plate carriers, it is still an overall decent general-purpose rifle which can be used for both medium- and close-range engagements.

NOTE: The following values are based on the ammunition's default specifications, and therefore only apply when fired from the baseline MX/MX 3GL rifle variants. The MXC carbine, MX SW light support weapon and the MXM marksman rifle have decreased/increased muzzle velocities respectively, which can change how quickly the rounds lose their velocity in mid-flight (affecting stopping power/range as a result).

For grenade rounds usable with the 3GL, refer to its dedicated article here.

All variants of the MX support being fed with either STANAGs or 100-round straight-box belt magazines. No matter the magazine, they are always available in three finishes; the standard Sand, Khaki or Black.

All are fully interchangeable regardless of weapon variant (i.e. MXMs can accept 100-round magazines), though it should also be noted that none of the MX's magazines can be shared with any variant of the Promet bullpup:

The last four rounds of the magazine will always consist of visible red tracers.

Has an identical weight of 10 "mass".

Stacked magazine intended for use with the MX SW light support weapon, though it remains interchangeable with other MX variants. Weighs in at a total of 25 "mass". The fourth round will always be a red tracer while the last four rounds of the belt consist exclusively of tracers.

It should also be noted that 6.5 mm NATO rounds from this magazine specifically are fired with much higher velocities of 880 m/s instead, though it remains identical in all other aspects.

Contains 100 rounds worth of visible red tracers. Shares the same attributes as regular 100-round belt magazines.

Has an identical weight of 25 "mass".