The Makarov is a 9 mm handgun featured in both ArmA: Armed Assault and ArmA 2. 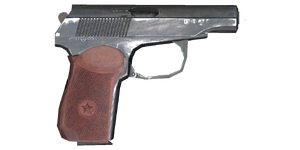 The Makarov PM is exclusively used by the SLA in ArmA: Armed Assault.

The Makarov PM is a semi-automatic handgun chambered to fire the 9×18 mm round.

It loads from 8-round box magazines, and can attain a fire rate of up to 400 rounds per minute with a muzzle velocity of 350 m/s. The Makarov lacks the ability to mount accessories but does have a sub-variant that has a muzzle suppressor attached.

Essentially the SLA's counterpart to the RACS/American M9 pistol, the Makarov has the same accuracy and recoil.

Its only real drawback stems from its unergonomic sights, which can be rather difficult to aim with against targets located beyond 35 metres. In all other aspects it isn't too different from the M9. 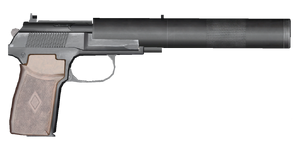 The Makarov Silenced is simply a suppressed version of the standard Makarov pistol carried by the SLA's elite Especas units.

Its muzzle velocity is slightly lower, clocking in at only 320 m/s but others remains virtually unchanged from the regular Makarov pistol.

Like its parent weapon, it is also chambered to fire the same 9×18 mm round but features an integral suppressor. Handling-wise, its recoil is no different to the base pistol as changes to performance (if any) are solely dependent on the loaded magazine.

Both variants of the Makarov support being loaded with two types of magazines. They each take up one inventory slot:

8-round magazine loaded with regular 9 mm ball ammunition. Does not contain any tracers. 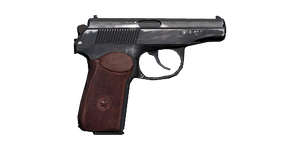 The Makarov is used by several BLUFOR, REDFOR and INDFOR factions ArmA 2.

Returning in ArmA 2, the Makarov now serves as the primary sidearm of multiple factions.

It continues to feed from 8-round box magazines but has a lower fire rate only 400 RPM, with its muzzle velocity also being reduced to 320 m/s. The Makarov lacks the ability to mount accessories but does have a sub-variant that has a muzzle suppressor attached.

Light and compact to carry, the Makarov serves as the standard-issue sidearm of the Russian Armed Forces and several other factions from former USSR territories such as the ChDKZ and even the CDF itself. It has a decent rate of fire and relatively low recoil, which makes it easy to wield in most situations.

Its main drawbacks are its difficult-to-use ironsights which makes it hard to aim at targets beyond 25 metres (the Makarov has an actual effective range of 50 metres), and the low damage of its 9 mm round. 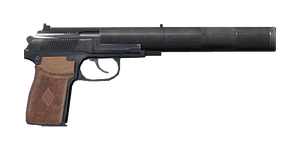 The Makarov SD also returns in ArmA 2 and remains as a suppressed sub-variant.

It is only carried by Russian Spetsnaz and Takistani elite guards. Its muzzle velocity has also been dropped to 310 m/s, though the ammunition itself has not been changed and can be negated by simply loading regular 8-round magazines.

In all other aspects, it remains completely unchanged to the baseline Makarov pistol.

Both Makarov pistols are able to load two types of magazines. They take up one inventory slot apiece and are fully interchangeable with one other:

8-round magazine loaded with regular 9 mm ball ammunition. Does not contain any tracers.