Baker is an infantryman from the U.S. Army contingent deployed to Livonia as part of NATO's Exercise Electron-39.

He specialises as a combat medic and is subordinate to squad leader Lieutenant John Kingsly. For the majority of the exercises, he also served as quartermaster for his unit.

At the height of the training exercises, Baker's squad, callsign Howlite, were assigned with the task of seizing the SIŁA Factory from its LDF defenders.

Baker was sent ahead of the squad to scout for troop movements along the ridge but was ambushed and "wounded". Unfortunately, the mission would soon end in failure after the rest of Howlite were also wiped out by the Livonians.

With nothing else to do for the meantime, he and the rest of Howlite returned to the factory to gear up for their next mission. Less than an hour later, Baker heard frantic calls over the radio from Lt. Kingsly before a massive explosion rocks the factory grounds.

A friendly drone had accidentally dropped one of its GPS-guided bombs which had fallen off-target, resulting in the deaths of seven Livonians and one American. Almost immediately, Electron-39 grinds to a halt as an investigation is conducted into the incident with all U.S. troops; Baker included, forced to relocate to Camp Kresnik while also decommissioning Camp Konrad.

Two weeks later on July 3rd, the exercises are completely cancelled with all foreign NATO forces ordered to pull out of the country within 48 hours. At this point in time, Baker had grown increasingly wary of the tense diplomatic situation between his country and that of the Livonian government; exacerbated no less by unconfirmed sightings of "black helicopters".

Suddenly, a massive ship-like object blankets the skies of Nadbór and within seconds of its arrival, discharges a powerful shockwave over the entire region. Almost all electronics, optics, and non-hardened equipment, are fried by the invisible blast. The ship-like object then continued to fly until it stopped just above the factory grounds.

With Colonel Richter confirmed KIA, Major Don Homewood assumed command and ordered all NATO forces to regroup onto his position. He was accompanied by theoretical physicists, Ian Kesson and Šimon Čapek, who briefed Baker and the others on the unknown entities.

One of the smaller aliens eventually settles above the nearby forest at Point Hopi. Homewood orders the team at Hopi to begin "communicating" with the alien, and dispatches Specialist Aiden Rudwell to assist in the endeavour.

However, the plan immediately goes awry after the Specialist is mentally attacked by the alien, causing the soldiers to panickedly open fire. The alien retaliated, forcing Homewood to assume that the aliens were indeed hostile, and that they needed to plan a counterattack. In the ensuing chaos, Corporal Jack Stype pulls out the explosive charges from their EOD drones and threatens to blow up the camp if Homewood didn't back down from their plan. Baker and Pvt. Lane sided with Stype and also began arguing with the Livonians.

For several minutes, Corporal Stype remained in a stand-off against Homewood, eventually culminating in the Major drawing his sidearm and threatening to shoot him. By then it was already too late. Panicking, the Corporal threw the charges at Homewood and detonated them, instantly killing the Major and effectively demolishing half of the camp in the process. Thinking that Stype was carrying out a mutiny against his superiors, the Livonians responded with lethal force and attempted to neutralise the wayward Corporal. Baker and the others returned fire and for several minutes, were locked in a confusing firefight.

They eventually came out ahead and killed off the remaining Livonians, though the Major lay dead and was (literally) in pieces. Furthermore, now that Baker and the others were wanted fugitives, they were left with no other choice but to hide. Stype rallied the survivors and set up a temporary camp at the base of an old radio tower. Lt. Kingsly's team on the other hand, would split off to go in search of a means to communicate with NATO command.

Stype initially chose Baker to seek out the alien roots, but was eventually swapped out in favour of Specialist Rudwell instead. Whilst the Specialist continued his search for the "roots", Baker remained at the camp to keep an eye on their equipment cache.

Not long after, a team of operatives - seemingly Russian, surround the camp, place Baker and the others in restraints, before leaving them locked up inside the shed. Rudwell later managed to get back to the camp and untied Baker and the others. But before they could get out, the doors slammed shut and were locked from the outside. Rudwell overheard a little of the conversation between their Russian captors, though it made absolutely no sense to him or Baker. Eventually, the Russians departed and Stype makes it back to the camp, unlocking the doors and freeing everyone.

With their camp now compromised, Stype prepared a getaway vehicle for them to discreetly evade LDF patrols. With Baker behind the wheel, they drove a fair distance away and decided to link up with Lt. Kingsly's team. Before that, Dr. Kesson wanted to gather more data from the alien network. However, it would be too dangerous for them to all split up, leaving Rudwell to once again go alone in search of the roots.

Rudwell collected from samples from the scattered roots and Stype told him to regroup with them, though the van's tyres had also gone flat and needed to be replaced. For the time being, Rudwell would have to go meet up with Kingsly's team alone.

Soon after Rudwell reactivated the tower, one of the alien drones suddenly appears right above it and seemingly looks in the Specialist's direction. Baker and the rest of the team raced up the hill, only to find Rudwell knocked out cold and the alien nowhere to be seen. Furthermore, the same Russians that had restrained him earlier were now here. Fortunately, the Russians made it clear that they meant no harm and had come in peace.

After reviving Rudwell, he informed him that the Russian team leader, who identified himself as Captain Ivan Severov, wanted to personally speak with Rudwell. Severov revealed to everyone about the true nature of "The Visitors", and that calamity would befall the entire region if they did not immediately secure the core at the factory. As if on cue, a flight of Livonian jets fly over the area and begin to launch missiles at the alien mothership.

Realising that the Livonians were about to make a terrible mistake, everyone agreed to Severov's plan and decided to split up into three groups: Baker would join Lt. Kingsly and the others to intercept LDF reinforcements, while Severov's Spetsnaz team would directly attack the factory grounds itself. Lastly, Rudwell would go alone to neutralise the missile launchers that the Livonians were using to bombard the ship and the core.

Despite being outnumbered, Baker's team initially succeeds in stopping a few waves of reinforcements from breaking through. However, the Livonians soon bring in heavier firepower to breach their defences. Unable to halt their advance, Baker's team is forced to pull back and abandon the position.

However thanks to the timely aid of the Russian Air Force and additional Spetsnaz reinforcements, the Livonians are decisively driven back and are forced to retreat. A helicopter later flew in to pick up Baker's team, evacuating them from the factory grounds to safety whilst Severov's men secured the core.

Baker was subsequently ferried out of Livonia and brought to a secure Russian military base in Kaliningrad. There, he and the other survivors were held in quarantine by the Russians as there was a risk that they had been contaminated by their close proximity to the alien core.

One month and ten days later, Baker and the others were finally released and brought back to the United States.

Baker is a Caucasian male with a short, dark brown-coloured hair. He wears a woodland-camouflaged plate carrier vest over his combat uniform, though he usually eschews helmets outside of training missions.

Sarcastic and excitable, Baker is Electron's resident nuclear fear monger. Prior to humanity's first contact with extraterrestrial life, he was known amongst his friends to be overly concerned about a possible nuclear attack on Livonia.

He made the conscious effort to stow away electrical equipment in jury-rigged Faraday cages to shield them against damage from electromagnetic pulses. However despite his understanding of EMPs, it appears that Baker doesn't quite grasp the difference between "rugged" and "ruggedised" technology; much to fellow Private Lane's annoyance.

Nonetheless, Baker is well-liked amongst his peers and maintains a relaxed, almost flippant attitude towards life. He openly jokes about the Hopi Incident with Specialist Rudwell, and blares with a van's horn despite the team attempting to remain undercover from the LDF. 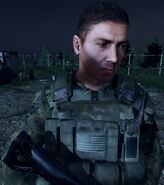