The Mi-8 is a family of transport helicopters featured in ArmA: Cold War Assault, ArmA: Armed Assault and ArmA 2.

The Mi-17 is a multi-role, twin-turbine medium helicopter. It stems from the Mi-8 family of transport helicopters and is one of the most prolific utility helicopter designs ever built since 1961.

Armament
By default, the Mi-8 is always armed with six 57 mm rocket pods fitted onto stub wings mounted on both sides of the fuselage (three on each).

Each individual pod stores up to 32 rockets at a time for a combined total of 192 rockets. All rockets are fitted with high-explosive (HE) warheads.

Features
The mainstay of the Red Army's tactical air mobility, the Mi-17 is capable of transporting a single full-size squad into or out of battle. It also carries an impressive loadout of six rocket pods loaded with HE warheads, which allows it to serve as a light gunship as well.

Mobility
The Mi-17 has decent handling and speed for a helicopter of its size. It can comfortably accelerate to a maximum speed of 240 km/h, though it remain on a steady flight path in order to achieve this. Unlike its American equivalent however, the Mi-17's bulkier airframe does cause it to have a much lower top speed. It will suffer from speed loss much more easily whenever the helicopter attempts to bank or gain altitude.

Drawbacks
The Mi-17 has slightly less armour plating and is more vulnerable to taking damage from anti-aircraft fire compared to the American UH-60.

At the same time, the Mi-17 lacks heavy machine guns for armament. It cannot defend itself against ground threats that are not directly in front of it, since the Mi-17 will need to turn around to face the attackers directly in order to return fire.

Crew Capacity
The Mi-17 has a maximum crew capacity of just one for the pilot, who also controls the rocket pods. The rear cabin is capable of transporting twelve passengers at a time.

The Mi-17 has 50 points worth of armour plating.

The rockets have initial launch velocities of 44 m/s and take 3.5 seconds for their motors to reach a top in-flight speed of 1,000 m/s. The warheads themselves have a blast radius of 3 metres.

The Mi17 is used exclusively by SLA forces in ArmA: Armed Assault.

The Armed Assault Mi17 retains the same configurations and serves in the same roles as its Cold War Assault counterpart.

Armament
It can now be armed with either a 7.62 mm medium machine gun mounted onto the left-side cabin door, or up to six 57 mm rocket pods fitted onto stub wings attached to both sides of the airframe.

The PKT feeds from a pre-loaded 100-round belt boxes and has up to more 11 boxes spare to reload from (for a combined amount of 1,200 rounds).

The rocket pods on the other hand each contain 16 rockets fitted with HE warheads. Altogether, the pilot has access to 96 rockets in total.

Features
The primary transport helicopter of the SLA, the Mi17 is mostly identical to its Cold War-era predecessor save for its ability to mount a side door MMG.

Compared to the American UH-60, the rocket-armed Mi17 is still better at providing air-to-ground fire support due to carrying 96 rockets at a time, allowing a single Mi17 to perform multiple strafing runs at a time. The passenger cabin on the Mi17 is also much larger and can transport two additional passengers at a time.

Drawbacks
Despite being the larger helicopter of the two, the Mi17 is actually less well-armoured than the UH-60 and at least for the MG-armed Mi17, is inferior at suppressing ground targets.

Because the PKT is only fitted onto the left side door, at least one side of the helicopter will always be left exposed to ground fire unless the pilot swivels the helicopter to face the gunner in that direction. The PKT is also very slow-firing and won't suppress targets as effectively, since it can only attain a fire rate of 800 rounds per minute. The UH-60's twin M134 miniguns on the other hand, can each attain fire rates of up to 1,200 RPM.

Crew Capacity
Both variants of the Mi17 can transport up to fifteen passengers at a time (the co-pilot is considered to be the fifteenth passenger). Depending on the loadout, it will also support a crew consisting of the pilot and optionally, a crew chief manning the side door gun. 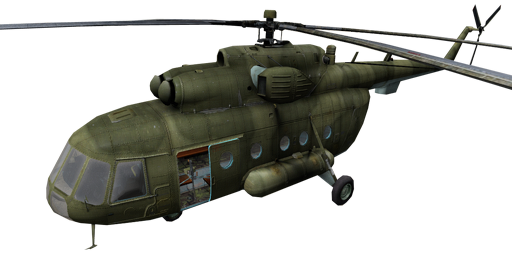 Baseline transport variant. Can carry up to 15 passengers at a time.

This model is always armed with a PKT 7.62 mm MMG on the left-side cabin door. The PKT has access to twelve 100-round belt boxes. 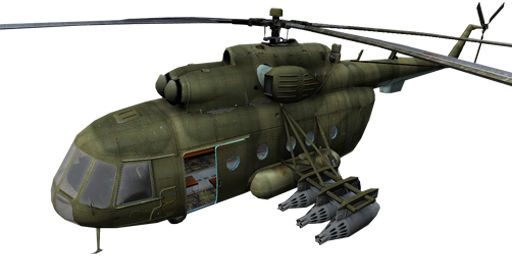 Identical to the baseline variant but is armed with six 57 mm rocket pods mounted onto stub wings attached to both sides of the airframe.

The 57 mm rocket pods each contain 16 HE rockets, and have a combined total of 96 rockets. The pods themselves are controlled by the pilot.

This model does not have a side door gunner. It transports the same number of passengers as the regular MMG-armed Mi17.

All variants of the Mi17 have base armour values of 25.

Mi17 hulls can withstand up to 25 points of damage.

Their engines can only withstand 6.25 points of damage before failing.

The Mi17's onboard systems can only incur a meagre 3.75 points of damage.

The main rotors can take 7.5 points of damage before breaking.

The tail rotors can only withstand 5 points of damage.

The pilot controls the 57 mm Rocket pods on the rocket pod-armed variant while the crew chief handles the cabin door-mounted PKT machine gun:

NOTE: Only available on the baseline Mi17 variant.

NOTE: Only available on the Mi17 (57mm Rockets) variant.

Unguided air-to-ground rockets. Fires high-explosive (HE) rockets that are powerful against groups of infantry and unarmoured/lightly-armoured vehicles.

Rockets are always fired in pairs, with a 0.2 second delay in-between volleys. They are launched with an initial velocity of 44 m/s and only take 0.2 seconds to reach a top speed of 900 m/s in-flight. The warheads have a blast radius of 12 metres.

The Mi-8 and its various sub-variants are transport helicopters used by several BLUFOR, OPFOR and Independent factions in ArmA 2.

In ArmA 2, the Mi-8 family serves in largely the same role and capacity as its Armed Assault predecessor.

Just as before, it can fulfil both troop transport and light gunship duties but is now available in many more variants rather than just a single model.

The PKTs are pre-loaded with a single 100-round belt box. They each have access to eleven spare belt boxes, which form a combined total of 1,200 rounds.

Features
The workhorse of many ex-Soviet militaries, insurgent groups, and even civilian air freight/aviation companies, the Mi-8 family continues to remain as a rugged and highly reliable transport helicopter.

Unique to the Mi-8 family, almost every armed variant is always equipped with PKT machine guns affixed to either the side or rear doors of the passenger cabin.

This allows the Mi-8's crew to defend itself during landings or pick-ups, whereas other light/medium transport helicopters must rely on other craft to support them.

Drawbacks
The Mi-8 family is not particularly resistant to small arms fire or AA weaponry. A short burst of shells from the ZU-23 for example, can quickly down even the Russian Mi-8MTV-3 or Czech Mi-17Sh.

At the same time, all variants of the Mi-8 have relatively poor handling and suffer greatly from speed loss due to the drag caused by their large airframes.

In contrast, the U.S. Army's Black Hawk or the USMC's MH-60S are far more agile in addition to being slightly tougher despite being smaller helicopters (dimension-wise).

Crew Capacity
All Mi-8 variants have a crew capacity of two for the pilot and co-pilot (who is considered to be a passenger), and can carry up to fifteen passengers at a time.

Depending on whether it is an armed/unarmed military or civilian variant, up to three additional crew chief positions may also be present. 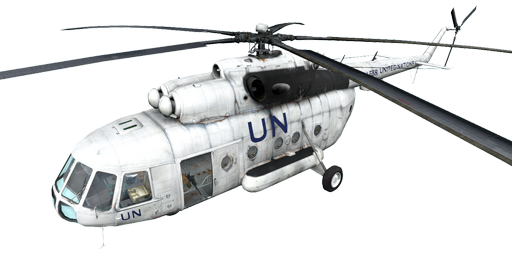 This variant is fitted with two PKT machine guns, one affixed to each side door. The PKTs are pre-loaded with a single 100-round belt box, and have eleven more in reserve for a total of 1,200 rounds (per PKT). 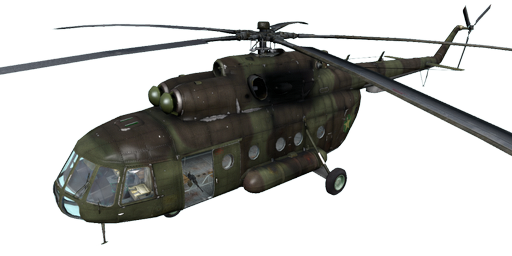 It is functionally and armament-wise identical to the baseline Mi-8. The only exception is that civilian Mi-17s do not have access to the door-mounted PKT machine guns nor defensive flare countermeasures. 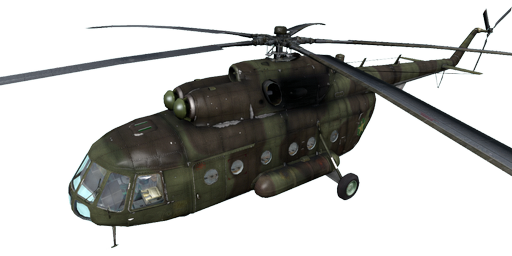 Aeromedical evacuation variant exclusively employed by the CDF. Identical to the Mi-17 but lacks armament.

The Mi-17-IVA can heal wounded infantry that approach it and "use" its medical supplies. 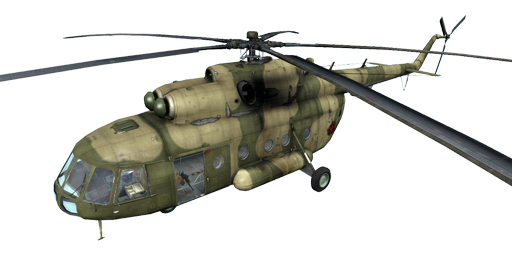 Used by ChDKZ insurgents. It is also completely identical to the baseline Mi-17 in terms of armament and avionics. 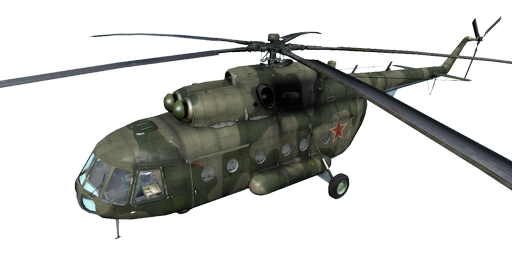 Employed by both the Russian military and ChDKZ insurgents.

There are no functional differences to the CDF Mi-17-IVA. 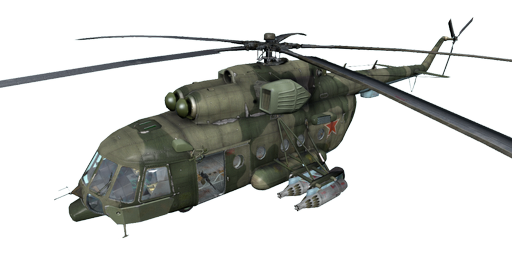 This model has a third PKT machine gun mounted to the rear cabin entrance, and is also fitted with stub wings on both sides of the fuselage. Each wing is affixed with three S-5 rocket pods that can fire high-explosive (HE) tipped 57 mm unguided rockets, with each pod containing 22 rockets (two pods only contain 21) for a combined total of 128 rockets.

For targeting purposes, the pilot can also toggle an aim assistant heads up display to help land hits with the 57 mm rockets. 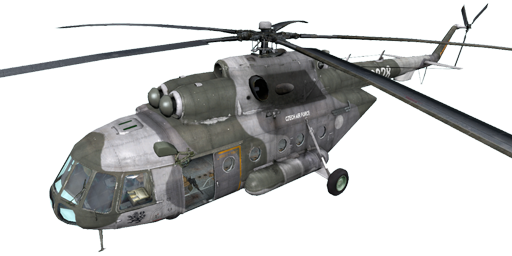 The Mi-171Sh is actually available with two loadouts, the standard PKT-only armed variant or the rocket pod equipped model. The Mi-171Sh fitted with rocket pods carries six of them on stub wings, with each pod containing 32 HE warhead-tipped rockets for a combined total of 192.

All variants of the Mi-8 have base armour values of 25.

The hull can survive 25 points of damage.

The engines can only incur 6.25 points of damage before failing. Destroying them will cause the Mi-8 to immediately lose power.

Flight instruments and avionic systems will fail after taking 3.75 points of damage.

The main rotor will be disabled if it takes more than 7.5 points of damage.

Only 30% of damage onto the main rotors are transferred onto the Mi-8's main "health" pool. If destroyed, it will become almost impossible to maintain lift.

The tail rotor will be disabled if it takes more than 5 points of damage.

Only 10% of damage onto the tail rotor is transferred onto the Mi-8's main "health" pool. Torque cannot be controlled if it is destroyed.

Weaponry varies depending on the helicopter variant. In most cases, the PKT 7.62 mm-chambered machine guns are controlled by crew chief and rear gunner positions. They do not have access to any vision enhancing optics but can utilise the PKT's dedicated gunsight to assist with aiming.

Only the pilot exclusively controls the stub wing-fitted rocket pods (S-5). The pilot also does not have any enhanced vision optics, but can toggle a Heads Up Display (HUD) in the cockpit to help with estimating the impact point:

NOTE: Available on all armed variants of the Mi-8/Mi-17.

NOTE: Only available on the Russian Mi-8MTV-3 and Czech Mi-17Sh (Rockets) variants.

Rockets are always fired in pairs. The pods have a firing delay of 0.08 seconds in-between volleys (750 RPM) and are launched with an initial velocity of 44 m/s. They take a further 1.1 seconds to reach a top speed of 580 m/s in mid-flight.

The warheads are high-explosive (HE) based and have a blast radius of 12 metres.

With the exception of civilian Mi-17s, all other variants of the Mi-8/Mi-17 possess Missile Approach Warning Systems, and will alert their pilots of incoming missiles already in mid-flight.

Military variants of the Mi-8/Mi-17 family has access to Radar Warning Receivers, and will warn their pilots of being locked onto by radar-based targeting systems.

No Mi-8/Mi-17 variant is fitted with an Infrared Warning Receiver and will not alert the pilot to being locked onto by infrared-base targeting systems.