The Military Offroad is a Light Utility Vehicle used by Takistani civilians along with several BLUFOR and REDFOR factions in ArmA 2. It was added with the release of the Operation Arrowhead expansion pack.

The Military Offroad is a 4x4 light utility vehicle designed to withstand the most demanding off-road conditions.

Features
It is available in up to three more variants aside from the baseline troop transport model. This includes two armed variants which are fitted with either a .50 cal heavy machine gun or 73 mm recoilless rifle mounted onto the roof of the rollcage or the rear cargo bed.

The third variant is a special ops model that carries a 30 mm automatic grenade launcher and a 7.62 mm medium machine gun for the commander to use.

Rugged and highly versatile, the Military Offroad can fulfil a variety of roles ranging from passenger/cargo transportation to combat support.

Although mainly intended to be used as a transport to get from one location to another, due to its large and truck-like configuration, the Military Offroad can also serve as a weapons carrier thanks to its ability to mount various heavy weapons.

Mobility
Despite being one of the largest (and non-truck based) wheeled vehicles in ArmA 2, all models of the Military Offroad are surprisingly quite fast for their size.

They are easily able to reach speeds of up to ~ 114 km/h on flat terrain and upwards of 40 km/h while driving off-road.

Unlike its smaller civilian counterpart, the Military Offroad isn't as susceptible to rollovers on steep terrain and has overall more stability/control on rough surfaces.

Drawbacks
While it provides slightly better protection than the American HMMWV or Russian UAZ-469, the Military Offroad isn't fully armoured and can be easily destroyed by a hail of small arms fire or grenade rounds.

The armed variants in particular, lack any sort of overhead cover or concealment, which means that all passengers and crew are equally exposed to enemy fire.

Crew Capacity
All models support both the driver and a passenger who sits in the front-right seat of the vehicle. Depending on the variant, they can either support more passengers (up to six more in the case of the unarmed model) or a single gunner. 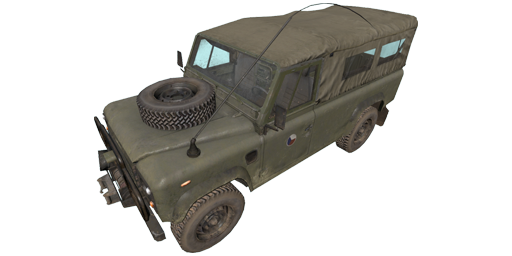 Baseline unarmed variant. Can transport up to seven passengers at a time. 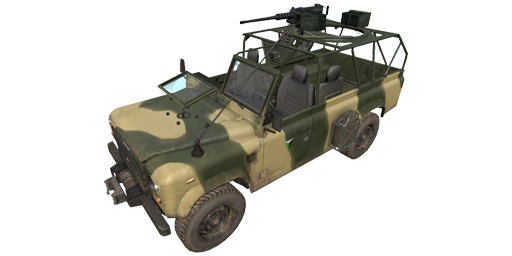 Armed variant. The tarpaulin cover and windows are removed on this variant, leaving both the rollcage and its riders exposed.

A .50 cal heavy machine gun is fitted to the roof of the cage that feeds from a 100-round belt box, and has a further five boxes to spare (for a total of 600 rounds combined). This variant can only transport a single passenger in the front-right seat of the vehicle next to the driver. 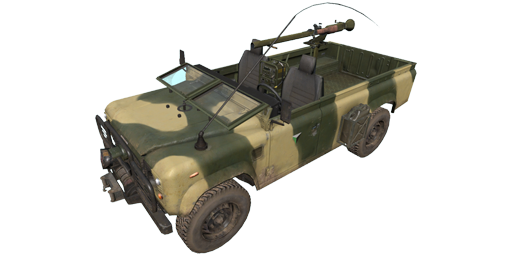 Dedicated anti-vehicle/anti-personnel variant. It can transport the same number of passengers as the M2 variant, but has had the rollcage removed completely to make way for the 73 mm recoilless rifle in the back of the vehicle.

The SPG-9 has a total of 16 rounds worth of PG-9N or OG-9V grenades that are fitted with either high-explosive anti-tank (HEAT) or high-explosive fragmentation (HE-Frag) warheads. 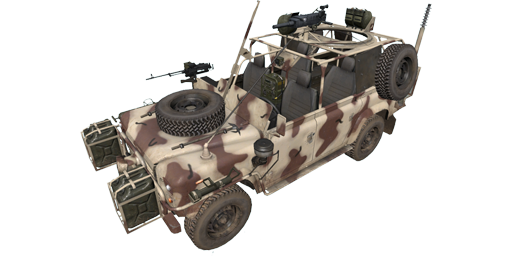 Mostly identical in appearance and configuration to the basic M2-armed variant, but has a 30 mm automatic grenade launcher attached to the top of the cage instead. The AGS-30 is pre-loaded to feed from a single 29-round grenade drum and has a further five drums spare (for a combined total of 174 grenades).

Meanwhile, the commander position located at the front-right seat of the vehicle has access to a forward-facing PKT 7.62 mm medium machine gun that feeds from 100-round belt boxes, and has up to three more boxes spare (with a combined total of 400 rounds).

(*) This variant is exclusively used by Czech 601st SFG units.
(**) These variants are only operated by the Takistani Army and their Republican Militia allies.

All variants of the Military Offroad have base armour values of 30.

Note that with the exception of the gunner's turret, component hitzones remain identical on all variants of the Military Offroad.

Their hulls can resist up to 30 points of damage.

Their engines can survive up to 60 points of damage before failing. No damage is shared with the vehicle's main "health" pool.

A damaged engine will prevent the Military Offroad from attain its top speed.

The fuel tank on all Military Offroads can take 30 points of damage before rupturing. No damage is shared with the vehicle's main "health" pool.

Damage the fuel tank will cause it to gradually leak fuel over time.

The tyres on all Military Offroads can take 15 points of damage.

Enhanced optics with magnification are not available on any of the armed Military Offroads:

NOTE: Only available on the Military Offroad (M2) variant.

NOTE: Only available on the Military Offroad (SPG-9) variant.

73 mm anti-vehicle recoilless gun. Can be loaded with either HE or anti-vehicle grenades. It cannot be manually zeroed.

NOTE: Only available on the Military Offroad Special variant.

7.62 mm medium machine gun. It has an effective firing range of 800 metres.

The PKT can attain a fire rate of up to 800 rounds per minute with a muzzle velocity of 900 m/s. Accuracy-wise, dispersion is always fixed at 0.00125 rad regardless of distance. It takes 5 seconds to finish reloading a fresh belt box.

NOTE: Only available on the Military Offroad Special variant.

30 mm automatic grenade launcher. Fires HE grenades that are strong against groups of infantry and unarmoured/lightly-armoured vehicles.

British Army sniper team with the unarmed counterpart of the Military Offroad.