Mitchell was a minor character in ArmA 3's The East Wind campaign.

Mitchell was an infantryman from the U.S. Army's 7th Infantry Division. He was attached to NATO's Task Force Aegis, a multi-national peacekeeping force deployed to the island of Stratis in the Republic of Altis and Stratis.

He served as squad leader of Charlie, one of the four squads formed by Captain Scott Miller in the aftermath of the unprovoked attack by the Altis Armed Forces.

Following the expiration of the task force's peacekeeping mandate, Mitchell was due to depart from the island nation within a matter of days.

Alongside several non-combat logistical platoons and engineer teams, they would continue to scrap any equipment and vehicles deemed too expensive to ship back to the continental United States.

However on July 7th, Mitchell would be caught up in a desperate fight for survival when the AAF garrison on Stratis suddenly launched a massive "counterattack" against the remaining peacekeepers. The surprise attack annihilates all of TF Aegis' commanders and results in the loss of several platoons.

Mitchell simply fled into the woods and attempted to survive against the odds. Fortunately, a radio message is broadcast to all NATO survivors; the transmitter is revealed to be none other than UKSF Captain Scott Miller, the sole NATO officer left on Stratis.

Miller urged any remaining survivors to consolidate at Camp Maxwell, a disused outpost built in the southern half of the island.

Upon arrival, Mitchell joined up with several of his comrades and at Capt. Miller's command, was assigned as the leader of Charlie squad. Since Charlie mostly consisted of the walking wounded and only had a few uninjured soldiers within it, he was largely delegated to a support role while Alpha and Bravo (commanded by Sergeants Conway and Lacey, respectively) took care of any direct combat.

Their immediate priority was to deal with a gunship which had crashed near Maxwell. Its smoke plumes threatened to give away the camp's position, so it had to be demolished quickly before any more AAF units would be drawn to it. Alpha would move directly to the crash site whilst Bravo would assault the village of Girna to recon the surrounding area.

Alpha secured the crash site and discovered that one of the pilots were still alive. Mitchell's squad was then sent to bring back the pilot on a stretcher. Unfortunately, the pilot's wounds were too severe and passed away before Mitchell's squad could arrive.

Their next concern was Bravo. Lacey's squad had been surrounded and were now pinned down at Girna by the AAF. Alpha moved onto the village to retake it, while Charlie remained on standby to assist as needed. After the village was seized, both squads were suddenly bombarded by a hail of mortars. Mitchell's squad rushed to support Alpha, and offered to provide fire support if Alpha's scouts could pinpoint where the spotters were hiding.

Alpha's scouts eventually discovered where the spotters were with a drone and laser marked their position. Mitchell proceeded to move onto their position and opened fire on the spotters, silencing the mortars bombarding the village.

However, an AAF jet suddenly flew over the village and was preparing for an airstrike. Mitchell advised Alpha and Bravo's leaders to immediately retreat back to Maxwell; his own squad followed suit as well, and the three squads regrouped back at Camp Maxwell for a debriefing.

Now that their situation had mostly stabilised, the time had come for all four squads (Miller's own Delta included) to retake Air Station Mike-26 which had fallen to the AAF early in the attack. Mitchell's squad would once again remain in the rear but would be providing artillery support this time.

Alpha's scouts helped to identify the guard towers protecting Mike-26. With only a few mortars to spare, they had to conserve the number of shells fired. After the defenders were eliminated, Alpha, Bravo and Delta moved in to mop up the remnants. However, word had gotten through from Miller that the AAF were dispatching several motorised squads to retake the facility. They would be arriving at Mike-26 shortly.

Thankfully, Alpha's scouts were able to direct their previous fire missions well and there was enough remaining for Mitchell to provide another barrage. Alpha's scouts again marked the road for Mitchell, and the remaining mortars were put to good use; disabling several of the AAF's vehicles before they could get too close to Mike-26.

As TF Aegis continued to hunt down the AAF's officers and neutralised more of their outposts, it was inevitable that Maxwell would be discovered sooner rather than later. In the early hours of the 8th, the AAF bombarded the camp with an artillery strike, killing and wounding many of the task force's remnants.

Mitchell was fortunate to escape being wounded, but the same could not be said for many in his squad and those still injured from yesterday's attacks. To their luck, Miller informed the survivors that help was on the way; NATO MEDCOM had dispatched reinforcements to Stratis, but they needed to secure the harbour town of Agia Marina first in order to clear a landing site for their troops.

Alpha and Bravo would be linking up to attack Agia Marina itself while Delta scouted the valleys north of the town to intercept any potential AAF reinforcements. Lastly, Mitchell's squad would kick off the operation by launching a diversionary assault against Camp Rogain in the north-east. His squad would need to create enough of a distraction to lure the bulk of the town's defenders into responding.

The diversionary attack worked better than expected, and the AAF quickly responded by dispatching two helicopters worth of troopers to "repel" Charlie. At that same moment, Alpha and Bravo had linked up to commence the main offensive against Agia Marina.

Not long after, they succeeded in breaching the military camp's defences and seized it from the AAF, leaving the town clear for NATO reinforcements to arrive. In the meantime, Mitchell's troops were entrenched and continued to hold the line against the scattered AAF units.

But like the rest of the task force, Mitchell is shocked by the sudden sight of CSAT helicopters blanketing the skies of Stratis. Several gunships and armed transports fly directly towards Camp Rogain and open fire on his remaining troops.

Mitchell can be heard relaying his panicked, final radio message moments before being cut short and perishing in the attack.

Mitchell was an African-American male who donned the standard attire of a squad leader, consisting of MTP-camouflaged fatigues with rolled-up sleeves, a ranger green-coloured plate carrier, and an Enhanced Combat Helmet (ECH). 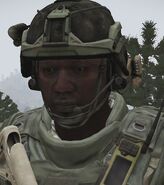