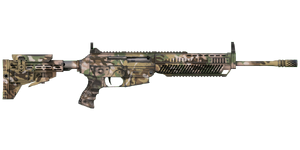 The Mk-I EMR is a 7.62 mm designated marksman rifle used exclusively by NATO forces in ArmA 3. It was added with the release of the Marksmen DLC.

The Mk-I EMR is a gas operated, selective-fire marksman rifle that is chambered to fire the 7.62×51 mm NATO round.

It loads from 20-round box magazines and can attain a fire rate of up to 600 rounds per minute on full auto, with a muzzle velocity of 940 m/s. The EMR accepts accessories on its top, side and underbarrel rails, and can also mount attachments on its muzzle.

The EMR provides the operator the ability to lay down precision firepower at medium-long ranges, while being (relatively) compact enough to use in close quarters if necessary.

Compared to the Mk18, the EMR is heavier to carry and retains a lower rate of fire. Overall accuracy is much better however, and the EMR has less noticeable recoil when the weapon is stabilised properly.

This, combined with its greater muzzle velocity, which can be further increased with the aid of a muzzle suppressor, allows the EMR to incapacitate or outright kill armoured targets at distances of up to 800 metres.

However, given the limited capacity of the EMR's magazine - incidentally a problem that all 7.62 mm battle rifles share, along with its increased weight and overall inertia penalties, the EMR is still not particularly useful in close quarters. As such, it shouldn't be brought onto missions that will involve CQB as its drawbacks in these situations far outweigh its strengths.

NOTE: Although the Mk-I EMR utilises the same magazines as other 7.62 mm NATO DMRs/battle rifles, its penetration depth and range is still much higher due to its increased muzzle velocity. All other aspects remain the same, however.

The EMR can load two types of 7.62 mm magazines: