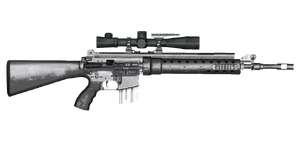 The Mk12 SPR is used by both U.S. Army forces and Black Element PMCs in ArmA: Armed Assault.

The Mk12 SPR is a gas operated marksman rifle with a rotating bolt that is chambered to fire the 5.56×45 mm NATO round.

It primarily loads from 20-round STANAG magazines, is capable of achieving a top fire rate of up to ~ 667 rounds per minute, and has a muzzle velocity of 850 m/s.

The standard-issue DMR of all U.S. forces operating on Sahrani and certain PMC groups, the Mk12 SPR is designed with interoperability in mind and its shooter can easily share ammunition with other members of the squad.

Compared to the SLA's SVD, the Mk12's 5.56 mm round is somewhat underwhelming and lacks the stopping power of the latter at ranges of beyond 600 metres. It is however much better in close quarters and medium ranges, thanks to its combination of a high base rate of fire and larger magazine size (twenty rounds per magazine versus the SVD's ten).

The Mk12 SPR supports being loaded with three different types of magazines. They all require one free inventory slot to carry:

Standard 20-round box magazine. Does not contain any visible tracers.

30-round magazine, also shared with the M4A1 carbine and M16A4 assault rifle.

Aside from having 10 additional rounds, it is completely identical to the standard 20-round box magazines.

Specialised magazine loaded with subsonic 5.56 mm ammunition. Identical to 30-round STANAGs save for having a much lower velocity of 320 m/s. 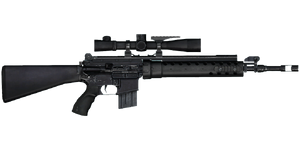 The Mk12 SPR is used exclusively by the U.S. Marines in ArmA 2.

The Mk12 SPR returns once more in ArmA 2 where it now serves as one of the two standard-issue DMRs carried by USMC Force Recon sharpshooters.

Performance and function-wise, it has changed little and continues to load from 20-round STANAGs though its muzzle velocity has been increased to 930 m/s. The Mk12 SPR is only available in a single variant that has a sniper scope fitted. It cannot be fitted with laser pointers is unable to mount a sound suppressor.

Unlike its heavier 7.62 mm counterparts, the Mk12 SPR has lower recoil and is also a semi-automatic weapon. The user can also continue to share ammunition with other members of the squad using 5.56 mm assault rifles/carbines like the M16A4 or M4A1.

Although the Mk12 SPR is intended to load from 20-round STANAGs, it supports 30-rounder magazines in addition to the G36's plastic magazines. In stark contrast, 7.62 mm DMRs require their own separate magazines and do not permit the user to resupply from other members of the squad.

However, its usage 5.56 mm ammunition is also its main drawback. Just like in Armed Assault, its range is still limited to just under 600 metres. Beyond that distance, the Mk12's 5.56 mm round is lacklustre and will not be able to compete with its 7.62 mm DMRs when it comes to both accuracy and stopping power.

The Mk12 SPR supports being loaded with up to six types of magazines. With the exception of 100-round drums, all others require only one inventory slot to carry (the drums occupy two slots):

Standard 20-round box magazine. Does not contain any visible tracers.

Identical to regular 20-rounders in all aspects other than capacity.