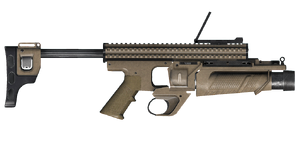 The Mk13 is a 40 mm grenade launcher used exclusively by the U.S. Army's special operations units in ArmA 2. It was added with the release of the Operation Arrowhead expansion pack.

The Mk13 is a single-shot grenade launcher with a double-action operation. It is designed to fire 40 mm grenade rounds.

It can only load individual 40 mm grenade rounds also shared by rifle-mounted underbarrel grenade launchers, and has a maximum fire rate of up to 120 rounds per minute. Unlike its rifle-mounted counterparts, the Mk13 uses a flip-up quadrant sight instead but is accurate up to a maximum distance of 400 metres.

Like the underbarrel EGLM used on the SCAR series of assault/battle rifles and the M79, the Mk13 can load several types of grenade rounds with different kinds of warheads, ranging from basic high-explosive (HE), to coloured smoke, as well as flare shells for illumination and signalling purposes.

However, it must also be reloaded after every shot, which greatly restricts its already painstakingly slow rate of fire. The Mk13 is always limited to a hard cap of eight grenades unless the operator stores additional rounds in a backpack, and is also treated as a primary weapon (that has ammunition which occupies secondary weapon slots instead). This effectively prevents the use of a sidearm since the slots will be taken up by the Mk13's grenades.

Just like the M79, these drawbacks all together make the Mk13 a mostly useless weapon, especially in comparison to the U.S. Army's M32. Short of there being no other grenade launcher-type weapons available, the Mk13 should always be avoided in favour of a UGL-equipped rifle like the Mk16 EGLM or Mk17 EGLM instead.