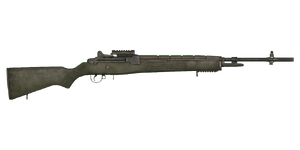 The Mk14 is a 7.62 mm battle rifle used by both Altian government Loyalist and FIA sharpshooters, along with Livonian civilian hunters in ArmA 3. It was added with the release of the Marksmen DLC.

The Mk14 is a selective-fire, gas operated battle rifle that is chambered to fire the 7.62×51 mm NATO round.

It loads from 20-round box magazines, and can attain a fire rate of up to 705 rounds per minute with a muzzle velocity of 850 m/s. The Mk14 only accepts optical sights on its top rail but can also fit bipods onto a small rail located beneath the forward end of the barrel, while also being able to mount attachments onto its muzzle.

Despite being described as an outdated weapon, its performance is almost identical to its contemporary counterpart, the Mk18 ABR. However, the Mk14 is not only lighter in comparison, but shares the same high damage output befitting its status as a medium power marksman rifle and is fairly accurate out to a distance of 600 metres.

The only main downside to the Mk14 is its higher-than-average recoil. Whereas the Mk18 ABR has at least somewhat manageable recoil during both semi/fully automatic fire, the Mk14's recoil is more unstable and is very difficult to handle.

This limits the operator to firing in semi-automatic only even at close range, lest they expend ammunition fruitlessly on missed shots. Additionally, unlike the Mk18 ABR the Mk14 also lacks a siderail and is thus unable to attach a flashlight or a laser pointer. 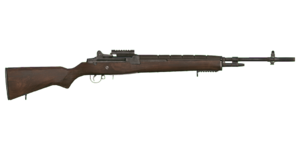 This variant is a civilian model of the mil-spec Mk14. It was added with the release of the Contact DLC.

Used by civilian hunters, Altian and Livonian criminal organisations, as well as Tanoan anti-government fighters, it features a few downgrades compared to its parent model. For instance, it is restricted to a semi-automatic fire mode only and is intended to feed from smaller 10-round magazines.

Though it retains an identical rate of fire and is unchanged when it comes to weight, its reduced capacity magazine and lack of a full auto mode hampers its usefulness in close quarters.

As compensation for these downgrades, the Classic is slightly more precise against distant targets. Furthermore, its reduced capacity issue can be somewhat alleviated by obtaining the mil-spec Mk14's 20-rounders, allowing them to retain the best of both weapons without having to sacrifice accuracy.

However, it should be noted that this only applies if the user has access to regular 20-round magazines. If the latter are not available then the mil-spec Mk14 remains as the more viable option for most situations.

Both mil-spec and Classic Mk14s can be fed with two types of magazines; either the 20- or 10-rounders:

Promotional screenshot released for the Tac-Ops DLC. Note the camouflaged Mk14 shown being wielded by the sharpshooter on the right.

DLC preview render. Note the silhouette portraying an AAF trooper as opposed to being an FIA guerilla instead.