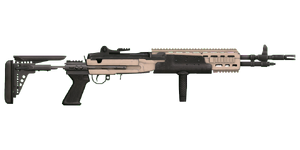 The Mk18 ABR is a 7.62 mm designated marksman rifle used by both Altian government Loyalists and the AAF in ArmA 3.

The Mk18 ABR is a selective fire, gas operated, rotating bolt battle rifle that is chambered for the 7.62×51 mm NATO round.

It loads from 20-round box magazines and can attain a fire rate of up to 705 rounds per minute on full auto, with a muzzle velocity of 850 m/s. The Mk18 can accept being fitted with accessories on its top, side and underbarrel rails, and can also be suppressed with muzzle attachments.

The Mk18 excels in taking down distant targets and is particularly effective at close-medium ranges. Its main weakness is that it has a low magazine capacity (incidentally a problem that all 7.62 mm battle rifles share) and that there is a significant muzzle climb whilst firing it on full auto.

Though it is not nearly as light as its CSAT counterpart, the Mk18 ABR - in stark contrast to NATO's Mk-I EMR, is lighter to carry and doesn't inflict as much of a penalty on the user's stamina. Consequently however, it is far less accurate at longer ranges compared to its NATO counterpart and has a slightly lower effective firing range as a result.

The Mk18 can load two types of magazines:

Promotional screenshot released during the pre-Alpha. The NATO infantryman in the foreground is armed with the Mk18 ABR.

Ditto, but uncustomised and lacking any optics or side rail attachments.