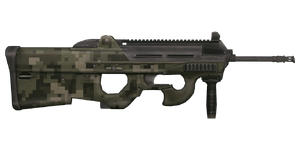 The Mk20 is a 5.56 mm bullpup assault rifle used by the AAF, Altian government Loyalists and in limited numbers with FIA guerillas in ArmA 3.

The Mk20 is a gas operated, selective-fire bullpup assault rifle that is chambered to fire the 5.56×45 mm NATO round.

It loads from 30-round STANAG magazines, and can attain a rate of fire of up to ~ 857 rounds per minute with a muzzle velocity of 900 m/s. The top and side rails support being mounted with accessories while the muzzle can also be fitted with attachments.

The Mk20 serves as the standard issue service weapon of the AAF, and is also used by FIA marksmen as a stand-in for heavier battle rifles. Similar to the TRG-21 used by the FIA, it is also a bullpup rifle that that is ideal for use in close quarters thanks to its compact layout.

Compared to the TRG-21, the Mk20's recoil is easier to manage (for a 5.56 mm weapon) and has a greater rate of fire of 857 rounds per minute versus the TRG's 750. As with the TRG-21 however, the Mk20's usage of 5.56 mm ammunition results in poorer performance over long ranges compared to assault rifles chambered in larger calibres such as the MX or AK-12.

As a result, the Mk20's higher muzzle velocity does little to compensate for its lower damage. The only upsides are that the weapon and its magazines are lighter to carry, though it also means that the user needs to expend more rounds per target if they happen to be wearing ballistic-resistant vests. 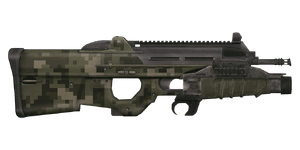 The Mk20 EGLM is a modified version of the baseline Mk20 rifle that has an underbarrel grenade launcher attached to it.

As with its parent weapon, it is also chambered to fire the same 5.56×45 mm NATO round while the grenade launcher can launch 40 mm grenades, ranging from harmless smoke/flare shells to high-explosive (HE) rounds.

It loads from the same 30-round STANAG magazines and is virtually identical aside from having an increased inertia penalty on the operator due to the addition of the grenade launcher.

The EGLM uses a red dot quadrant sight that can be zeroed up to a maximum distance of 400 metres.

All variants of the Mk20 support being fed with 30-round STANAG magazines, interchangeable with any other weapon chambered for the 5.56 mm NATO round. They are all available in either a Black or Sand finish, and have identical weights of 8 "mass" apiece: