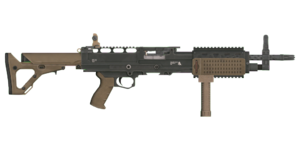 The Mk200 is a 6.5 mm light machine gun used by several Independent and BLUFOR factions in ArmA 3.

The Mk200 is a belt fed, gas operated fully-automatic light machine gun that is chambered to fire 6.5×39 mm caseless rounds.

It feeds from 200-round linked belts stored in soft pouches, and can attain a fire rate of up to 800 rounds per minute with a muzzle velocity of 920 m/s. The Mk200 can mount accessories on its side, top and underbarrel rails, and can also have suppressors fitted onto its muzzle.

Compared to both its CSAT and Russian-made counterparts, the Mk200 is lighter to wield against the former while possessing a much larger magazine capacity (200 rounds versus the Zafir's 150/RPK-12's 75).

It also has a much higher muzzle velocity while also being better in terms of accuracy over long ranges. Unlike the Zafir, it can be suppressed, which renders it ideal for stealth missions that require the firepower of an LMG.

The main drawback to the Mk200 stems from its use of the smaller 6.5 mm cartridge. While this is what makes the Mk200 lighter to carry, it also means that its rounds are relatively less hard-hitting compared to the Zafir's 7.62×54 mm rounds. The other downside is its inability to toggle a semi-automatic fire mode, which limits it to firing on full auto only.

The Mk200 can be fed with four types of belt pouch magazines. All four have identical "mass" values of 50 units:

The fourth round will always be a visible yellow tracer. Only the last four rounds are exclusively tracers.

Identical to regular yellow pouches, but every fourth round (along with the last four) will be coloured in red instead.

Consists purely of visible yellow tracers. Identical in all other aspects to regular belt pouches.

Identical to yellow tracer-loaded belts but coloured in red.