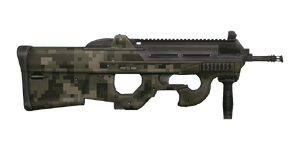 The Mk20C is a 5.56 mm bullpup carbine used by both the AAF and Altian government Loyalists in ArmA 3.

The Mk20C is a carbine variant of the Mk20 assault rifle. Along with its parent counterpart, it is also chambered to fire the same 5.56×45 mm NATO round.

It loads from 30-round STANAG magazines and is completely identical performance-wise aside from having a lower muzzle velocity of 820 m/s instead. The Mk20C has the same ability to mount accessories on its top and side rails, and can be fitted with muzzle attachments.

Unlike the baseline Mk20, the Mk20C has a lower muzzle velocity and is slightly worse accuracy-wise. But because of its compact size and negligible inertia penalty, the Mk20C is easier to wield in confined spaces compared to its full-length barrelled parent.

This allows it to be comfortably carried inside vehicles and structures and for this reason, is exclusively utilised by AAF vehicle and helicopter crews along with non-combat support troopers.

Unlike its FIA counterpart, the Mk20C does not retain the same degree of accuracy as its baseline model. This results in it being considerably worse off when it comes to engaging targets that are beyond short-ranged distances, which essentially restricts the Mk20C's effective range to just under ~ 290 metres.

NOTE: Due to the Mk20C's reduced muzzle velocity, fired ammunition will always scale to an initial velocity of 820 m/s instead.

The Mk20C can load 30-round STANAG magazines which are interchangeable with any other weapon chambered for the 5.56 mm NATO round. They are all available in either a Black or Sand finish, and have identical weights of 8 "mass" apiece:

Promotional screenshot released for the campaign's second episode. Orestes (on the right) can be seen armed with the Mk20C fitted with an ACO sight.

Major Gavras (left) and Dimitriou (right) on the run from NATO forces. Dimitriou can be seen armed with the Mk20C in the back.