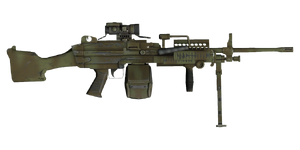 The Mk 48 Mod 0 is an air-cooled, gas operated belt-fed machine gun that is chambered to fire the 7.62×51 mm NATO round.

It loads from 100-round belts stored in cloth pouches, and has a fire rate of up to 846 rounds per minute with a muzzle velocity of 900 m/s. They are both equipped with the CCO red dot sights, though only U.S. Army Mk 48s are outfitted with a laser pointer. Both also feature (non-functional) integrated bipods but neither variant can be fitted with a sound suppressor.

Essentially a streamlined variant of the M240 designed exclusively for use by U.S. special operations, the Mk 48 possesses the same high damage output and fire rate. It is easier to wield in close quarters has (slightly) less recoil compared to the M240.

However, the Mk 48 has greater dispersion and is slightly less accurate. This is particularly noticeable when attempting to engage targets that are beyond 600 metres away. Additionally, the Mk 48's lack of magnified optics makes it difficult to visually identify targets beyond 600 metres. At these distances, it may be advisable to rely on the laser sight for aiming due to the CCO's lack of magnification and poor clarity.

The Mk 48 Mod 0 is limited to feeding from one type of "magazine". It requires two free inventory slots to carry:

100-round linked belt stored in a clothed box. Also shared with M240s.

Sergeants Randolph Sykes (front) and Chad Rodriguez (background) of the USMC Force Recon, callsign 'Razor Team'. Rodriguez (in the background) is armed with the Mk 48 Mod 0.

1st SFOD-D operator (left) armed with the desert-camouflaged variant of the Mk 48.