The Mountain bike is an off-road bicycle used by both the U.S. Marines and Chernarussian civilians in ArmA 2.

The Mountain bike is a rugged, single-seat bicycle that is designed to be ridden across rough and uneven terrain.

Features
As a mechanically-powered vehicle it naturally does not require fuel to operate, which makes it ideal for long distance patrols where refuelling options are either limited or unavailable.

It is also extremely silent to operate, and aside from the rider choosing the make their presence known by ringing the bike's bell, will be almost impossible to hear from afar.

Drawbacks
However, a consequence of this is that it also makes travelling uphill more difficult since the bike's "power" is dependent on the rider themselves. And since the bike itself does not have any armour plating or overhead cover, the rider is left completely exposed to enemy fire.

Likewise, colliding with hard objects may cause injury or even death if the rider is careless, so caution should always be taken when going off-road. As even though the Mountain bike is intended for use on rough terrain, there is always a high risk of the bike itself being flipped by uneven surfaces.

Crew Capacity
The Mountain bike can only transport its driver and is unable to carry any passengers.

Mountain Bikes have base armour values of 5.

Either of the Mountain Bike's tyres can only withstand 5 points of damage before they burst. 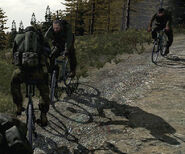 Bicycles of comparable role and configuration