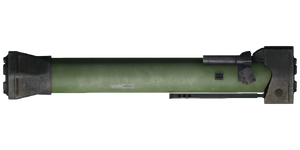 The NLAW is a 150 mm missile launcher used exclusively by British Army troopers in ArmA 2. It was added with the release of the British Armed Forces DLC.

The NLAW is a portable fire-and-forget, guided missile launcher.

It uses missiles with 150 mm high-explosive anti-tank (HEAT) warheads that are capable of hitting targets at distances of between 800 and up to 1,200 metres away. The launcher comes with an integrated ACOG scope with a magnification strength of 3x.

Unlike the Javelin, the NLAW has the advantage of being lighter to wield as each missile only occupies three inventory slots instead of six. This permits a lone AT gunner to carry a single backup missile, allowing for a total of two missiles per user without having to rely on another trooper to carry additional munitions for them in a backpack.

Additionally, in stark contrast to the Javelin, there is minimal risk of the missile missing its target at close range. This is because the missile flies directly towards its target rather than using a curved trajectory like the Javelin. As such, it is much more effective at attacking vehicles that would otherwise be too close for the Javelin's missile to reliably hit.

The NLAW only supports loading one type of missile. It requires three inventory slots to carry:

The missile is always launched with an initial velocity of 40 m/s and takes a further 2 seconds to reach a maximum speed of 340 m/s in flight. The warhead has a blast radius of 2 metres.