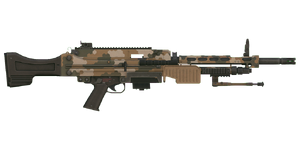 The Navid is a 9.3 mm general-purpose machine gun used exclusively by Mediterranean CSAT forces in ArmA 3. It was added with the release of the Marksmen DLC.

The Navid is a gas operated medium machine gun that is chambered to fire the 9.3×64mm round.

It feeds from 150-round belts stored in cloth pouches, and has a variable rate of fire depending on its current fire mode: either 705 rounds per minute or 1,500 rounds per minute (on burst fire). It has a muzzle velocity of 785 m/s, and can fit accessories onto its top, side and underbarrel rails. Unlike the Zafir LMG used by Mediterranean CSAT forces, the muzzle also supports being mounted with attachments.

The Navid is an excellent weapon to use for both medium and long-ranged combat. It features a unique three-round burst mode that can fire all three rounds in the span of less than 0.04 seconds, which can easily tear through light vehicles or soft cover.

When employing the Navid, the operator should always have a good view of the area that they are engaging, and be dug onto a stable surface. Given that it is chambered in 9.3 mm, the Navid can easily penetrate through thin walls at almost any distance.

However, it should also be noted that while it can be devastating from a defensive position, the Navid is also extremely heavy to carry. Its bulky size makes it poorly suited for close quarters, and its excessive weight makes it taxing to carry on long distance recon patrols or any other situation that demands mobility.

It is also far less accurate at long ranges in contrast to the NATO SPMG, as the Navid has nearly twice the amount of base dispersion compared to the latter.

In retrospect, these factors contribute to the Navid being more a difficult weapon to handle overall. But if set up properly, then it can become a powerful weapon in the right hands.

The Navid only supports being fed from a single type of cloth pouch. It has a "mass" value of 70 units:

Linked belt containing one (visible) green tracer for every three rounds. The last six rounds of the belt always consist of tracers.