News Today is a daily newspaper publication based in the United States.

An American middle-market newspaper, News Today reports on the latest developments in global events, the economy and domestic U.S. politics.

Their online reader can be accessed via the publication's official website at "www.newstoday.com" and "www.newstodayservice.com" (minus quotations).

As of 2039, at least four members of the writing staff are publicly known: 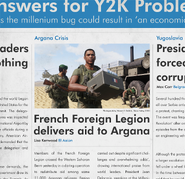 Excerpt of unknown edition, circa 2000.