Northgate is a minor character in ArmA 3's The East Wind campaign.

Group 14 were assigned with supporting the local resistance movement on the island nation of the Republic of Altis and Stratis. However, Northgate's primary objective was the retrieval of a CSAT weapon of mass destruction known only by its name of "Project Eastwind".

On July 7th, 2035, Group 14 broke off from the main group on Altis and boarded flight a flight bound for the island of Stratis. Not long after their arrival at Camp Maxwell, the Altis Armed Forces launch a "retaliatory" attack against the peacekeepers of Task Force Aegis.

The leader of Group 14, Captain Scott Miller, rallied the survivors of TF Aegis over the radio and dispatched James to collect them. Disguised as British special forces, Northgate assumed the callsign of Delta and supported the ragtag survivors in numerous raids against the AAF.

The next day, Northgate and the rest of Delta made preparations to leave the island, having apparently finished their search on Stratis. Delta prepared two boats while waiting on TF Aegis to commence their final assault against the town of Agia Marina.

As planned, TF Aegis were annihilated by CSAT reinforcements, though a small number of survivors somehow managed to flee and were running towards Delta's position. Miller waited to see if the survivors could reach their location. When they finally arrived, the survivors boarded the boats and departed from the island, bound for Altis to rejoin with the rest of Group 14. Unfortunately, two AAF jets suddenly strafe Northgate's boat and fired their missiles, capsizing the vessels and knocking Northgate overboard.

Somehow, Northgate and most of Group 14 were able to reach the mainland intact though sadly, Sergeant Hardy had perished on the way back. Regardless of his loss, Northgate's team continued to support the guerillas on the mainland. He was to assist in the interception of a CSAT supply convoy, but was later diverted to investigate a different target; specifically to track a high-value target stationed at the main airport. Days later, Northgate would also assist in escorting an AAF defector back to the main guerilla camp.

As the mission continued, Group 14 eventually discovered the location of the main facility where Project Eastwind was being held. It was too heavily fortified however, and assaulting the base with only the members of Group 14 was out of the question. With a NATO invasion looming on the horizon and time running short, Northgate's team made preparations to sabotage the invasion.

However it wasn't enough, and the base personnel were readying to leave the country with Eastwind in tow. Having run out of options, Group 14 assaulted the base in an attempt to seize it by force. The attack was futile, and Group 14 suffered heavy casualties with Northgate himself being cut down in the process.

Despite the mission on Altis ending in failure, Northgate and most of Group 14 managed to survive the assault. Northgate's team were later transferred to the Horizon Islands after Capt. Miller requests for backup; he and the operatives of Group 15 had managed to take hold of Eastwind but were in danger of being overrun by CSAT's Viper Team.

At the last minute, Northgate and the rest of Group 14 arrive in helicopters to provide covering fire. Together with Group 15 they succeed in fighting off Viper and at long last, manage to retrieve the Eastwind device.

Northgate is a white male with short black hair and a cleanly shaved face. During the operation on Altis, he wore Dazzle-camouflaged fatigues and a snakeskin/mud brown plate carrier vest, along with a snakeskin-camouflaged Light Combat Helmet (LCH). When deployed to the Horizon Islands, he opted for a ranger green-coloured version with no flag patch and a thermally-masked uniform/helmet instead. 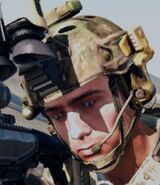