"Orestes" is a supporting character in ArmA 3's The East Wind campaign.

Orestes was once an officer who served in the Altis Armed Forces (AAF). He went by the radio callsign of Spartan-Actual.

For the most part however, Orestes has always been sympathetic towards the so-called "Freedom and Independence Army" (FIA) guerilla organisation, a growing band of anti-Akhanteros fighters who opposed the government's hardline policies.

By mid 2035, Orestes had been assigned to overseeing patrols along the western coast of Altis, enforcing the checkpoints along the main roads between the old capital of Kavala and the abandoned mountain village of Oreokastro.

However, the government's declaration of martial law in light of the insurgency and its continued violations of human rights only reinforced Orestes' pro-FIA sentiments.

On July 9th, joint AAF/CSAT forces carried out a large-scale counterinsurgency operation in Kavala to root out the FIA caches and cells hidden in the city. The bloody nature of the operation led to the deaths of many fighters and civilians caught up in the fighting.

Repulsed by the government's inhumanity, the operation itself proved to be the breaking point. This finally motivated his decision to defect to the FIA once and for all. Some of his subordinates felt the same way, and equally began to consider defection as a viable alternative to military service.

In defiance of the AAF's orders, Orestes turned a blind eye to guerilla fighters and illegal weapons being smuggled through his checkpoints.

Secretly, Orestes had been in contact with the FIA's leader, Kostas Stavrou, over the course of two weeks after the Kavala operation. He discussed his options with the guerilla leader and in exchange for amnesty, would help the FIA deal a blow against CSAT directly.

However, Orestes knew that CSAT officials were already suspicious of his possible ties to the guerillas. It would only be a matter of time before his cover was blown and he'd "disappear" - just like all the others before him. On July 22nd, he and two of his close subordinates boarded a vehicle and made their way towards an abandoned farm on the outskirts of Oreokastro.

As he had expected, CSAT were not as oblivious to his ties as the other AAF commanders were. While driving to meet with the FIA contact, a CSAT patrol tailed his vehicle all the way to the meeting point.

On arrival, Orestes hastily greeted the contact - an American soldier named Ben Kerry (whom Stavrou had already told him about), but warned the Corporal about the tailing patrol. Kerry advised that they could simply fall back into the forest to lose them, but Orestes remained adamant that his cover could not be blown; not yet, in any case. They had to be silenced first before they could discover his betrayal.

Kerry's guerillas set up into position and when the patrol arrived, quietly eliminated the soldiers in one swift stroke. When they returned to talk with him, Orestes explained that he wanted to inflict some retribution against CSAT for their role in the Kavala operation.

But Orestes made it clear to the American that they only had one opportunity to fool the CSAT officials. He offered Kerry two options; either he could call in a squad of CSAT soldiers to be brought in (and destroy one of their helicopters for good measure), or they could ambush the engineers at the Oreokastro vehicle depot being used to repair damaged tanks.

Either way, Kerry quickly made his decision and dispatched the rest of Omega to get into position for their strike. Orestes proceeded to relay his support request to the CSAT garrison's commander. When the guerillas had finished their mission, they returned to meet with Orestes himself.

However, Orestes and his men were not alone. British special forces Lieutenant James and his team of operatives had arrived and were there to "escort" Orestes to safety. Orestes was less than pleased to see the British operative, and brushed away James' suggestions that he would "disappear" at the first chance if he was unwatched.

He also remained adamant that he nothing to do with James or his team, and that he had already explained his situation to Miller. Orestes was thereafter brought back to the FIA's main camp and was immediately debriefed by Stavrou. He revealed that Nikos Panagopoulos, one of the FIA's key associates, was being held by CSAT at Camp Tempest on Stratis. They didn't have much time to rescue him as he would be relocated soon, so they would need to act quickly if they wished to save Nikos before it was too late.

Orestes is an Altian male with a light chin beard/moustache with a dark brown-coloured head of hair. He wears the standard attire of all AAF military officials, consisting of Digital-camouflaged officer fatigues, a field cap with a headset attached as well as an olive green bandoleer.

A shrewd-eyed individual, Orestes could see that the tide of the insurgency was beginning to turn against the government. He always remained careful to keep his sympathies towards the FIA hidden to his superiors however, so that he wouldn't be exposed until the time was right for him to defect. 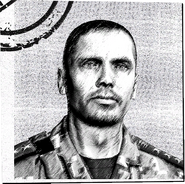