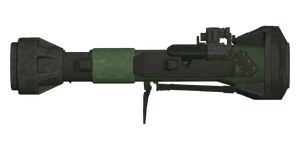 The PCML is a portable short-range, fire-and-forget, guided missile launcher.

It can only load missiles with 150 mm high-explosive anti-tank (HEAT) tandem charge warheads, which are capable of striking targets at distances of between 20-800 metres away. The launcher comes with an integrated night vision-capable sight that has a magnification strength of 2x, and an integrated laser rangefinder. It is able to toggle between a direct-fire or overfly top-attack (OTA) mode.

The PCML's HEAT missile uses a shaped charge warhead like most ATGMs, which means that it has some utility against slat cage-protected vehicles (to a certain degree). This is because the initial blast will usually destroy the cage while the penetrator punches through to strike the vehicle's main armour.

However, engagements against even moderately armoured vehicles such as tracked Infantry Fighting Vehicles or Main Battle Tanks is a poor choice due to the low damage output of its warhead against said targets (especially in direct-fire mode). As such, it is the most effective against lightly-armoured ground vehicles.

Unlike the heavier Titan, the PCML locks onto targets using a visual sensor as opposed to infrared, and is able to acquire any kind of target regardless of whether it has a 'cold' or 'hot' thermal signature. Additionally, up to two spare missiles can be comfortably carried in any of the smaller backpacks without having to rely on another person to haul them.

However it should be noted that unlike the Titan family of ATGMs, the PCML cannot make use of SACLOS guidance. This means that missiles fired without a lock-on will not follow the user's crosshairs. Also in stark contrast to the Titan, the PCML's visual sensor can be affected by poor weather and lighting conditions, which causes a reduction in the sensor's lock-on range. In the case of heavy fog, the PCML may not be able to lock onto distant targets at all.

Likewise, the missile itself only retains enough fuel for a flight time of seven seconds. Should it fail to hit a target before it runs out of fuel, it will automatically self-destruct mid-flight regardless of how close it was to reaching a target.

Overall, the PCML as an anti-armour system is arguably the least capable of the guided missile launchers in ArmA 3, being only marginally better than the RPG-7 in long range ambushes versus mobile armoured targets (and only when there is no one else to assist in ranging targets for the user).

While the PCML's lock on capability theoretically eliminates the need to manually predict a target's trajectory, the lengthy amount of time required to actually lock the target (if a lock-on is even possible at all due to the weapon's susceptibility to weather/terrain clutter), the presence of a minimum lock distance, and the ineffectiveness of the missile against heavy armour (necessitating multiple shots) makes this a moot feature in most cases.

Meanwhile, NATO's alternate (and unguided) AT launcher, the MAAWS Mk4, possesses greater penetration, a higher damage output, a faster engagement time, lighter to carry rockets, has anti-personnel munitions, and has faster flying rockets. Combined with the internal laser rangefinder on the Mod 1 variant, this results in the PCML being a mediocre AT system at best due to its inherent drawbacks.

The PCML is only capable of loading and firing one type of missile. Each missile has a weight of 80 "mass" units:

The primary warhead has a blast radius of 2.4 metres, while its kinetic submunition has a launch velocity of 1,000 m/s and a penetration depth of 400 millimetres.

The PCML's missile relies on only one kind of sensor for guidance:

The missile can lock onto targets between 20-800 metres away, and is only able to track mobile vehicles that are moving at speeds of up to 126 km/h. The sensor's lock-on cone is restricted to a horizontal and vertical angle of 5 degrees.

Poor visibility conditions such as darkness or rain can reduce its lock-on range by 20% (down to 640 metres from 800). Fog can also cause a further reduction to its lock-on range; this reduction begins at 6% (800 down to 752 metres) and will steadily increase depending on how thick it is.

The PCML can toggle between two flight profiles:

Missile uses a linear flight trajectory. This is the default mode for the PCML's missiles.

In overfly top-attack (OTA) mode, the PCML's missile will act similarly to being launched in direct-attack mode. However, it utilises a slightly different initial flight trajectory after launch.

Pre-patch PCML inventory icon. Note how it simply depicts the ArmA 2 NLAW and not the actual in-game PCML.