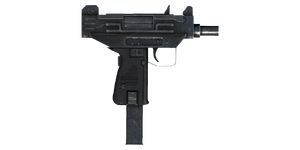 The PDW is a 9 mm submachine gun used in limited numbers with U.S. Army forces in ArmA 2. It was added with the release of the Operation Arrowhead expansion pack.

The PDW is a blowback-operated submachine gun that uses an open bolt design. It is chambered to fire the 9×19 mm round.

It primarily loads from 30-round box magazines, but is also able to load the same box/curved magazines used by the G17/M9 pistols and MP5A5 SMG. It can attain a maximum fire rate of up to 800 rounds per minute, and has a muzzle velocity of 400 m/s. The PDW does not support being fitted with any optical sights or accessories, but has a sub-variant fitted with a sound suppressor.

Compared to the Czech-made Sa-61, the PDW is far superior in almost every aspect. Not only does it have a larger magazine size (30 rounds versus the Sa-61's 20/10 round cap) but it can load the same magazines used by other 9 mm firearms. It also has far less recoil and is slightly better accuracy-wise at longer ranges, though it is still limited to a maximum effective range of just 150 metres.

Altogether, this renders the PDW a much more useful sidearm to wield in comparison to the Sa-61, and is actually helpful at serving as a backup weapon for snipers or vehicle crews. 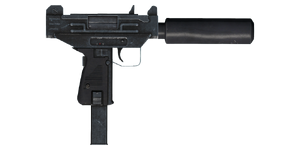 The PDW SD is simply a suppressed version of the baseline PDW.

The main difference with the PDW SD is its sound suppressor, which causes it to have a reduced muzzle velocity of just 320 m/s. It is also unable to load non-subsonic magazines, and can only fire subsonic 9 mm ammunition.

The unsuppressed PDW is capable of loading seven types of magazines, but the suppressed model only supports being loaded with three of them. They all take up one secondary weapon inventory slot apiece:

Standard 30-round box magazine. Does not contain any visible tracers.

30-round box magazine loaded with specialised subsonic ammunition, intended for use with the PDW SD (though it can be loaded by the unsuppressed PDW as well).

Rounds fired from this magazine have a lower muzzle velocity of 320 m/s.

30-round curved magazine used by the MP5A5. Identical to the PDW's regular box magazines in all aspects aside from appearance.

Curved magazine used by the MP5SD6. Also identical in all aspects to subsonic PDW magazines aside from its appearance.

This magazine can be loaded by the PDW SD.

17-round pistol magazine used by the G17. Rounds fired from this magazine have a lower muzzle velocity of 360 m/s.

This magazine can be loaded by the PDW SD.