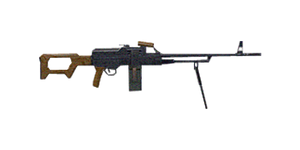 The PK is used by Soviet military forces and the Nogovan Partisans in ArmA: Cold War Assault.

The PK is a gas operated, belt-fed medium machine gun that operates with an open bolt design. It is chambered to fire the 7.62×54 mm cartridge.

It loads from 100-round belts stored in metal boxes and is able to attain a fire rate of up to 600 rounds per minute, with a muzzle velocity of 1,000 m/s. The PK has a maximum effective range of up to 700 metres and shares an identical-looking ironsight with the AK-74 assault rifle.

The PK is the standard-issue GPMG of the Soviet Armed Forces. A moderately powerful machine gun, the PK provides every Soviet squad with the ability to suppress enemy infantry within whichever direction it's pointed at.

It retains a good base rate of fire, above average accuracy, and a large ammunition capacity which makes the PK a decent competitor to its American counterpart.

However as with the M60, the PK also suffers from several major drawbacks. Though its accuracy isn't particularly terrible, its ironsights are notoriously difficult to aim with since they obscure the shooter's view.

Its recoil is difficult to control, and its relatively high fire rate also means that a single belt will be quickly depleted after just a few seconds of sustained fire. Lastly, as with the M60 using the PK will prevent the user from being able to carry a rocket launcher.

Fortunately, the problem of recoil can be slightly remedied by simply shooting from a prone position which can help mitigate some of its effects. Shooting in short bursts (of 4-5 rounds instead of firing on full auto), will also lower the rate at which it consumes ammunition while still being able to provide suppression at long distances.

Alternately, one effective solution to maintain accuracy while firing long bursts is to simply aim slightly below the intended target (at least good few centimetres under), which will result in hitting the target with sustained fire with almost every round. Provided that this is done from a prone position, the high recoil will then (mostly) keep the barrel pointed directly at the target.

The PK only supports being fed from one "magazine". It requires two free inventory slots to carry: 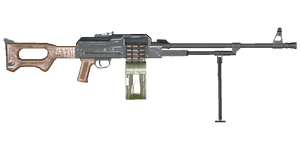 The PKM is used exclusively by SLA forces in ArmA: Armed Assault.

Returning from Cold War Assault, the PKM now serves as the primary GPMG of SLA forces.

As with its Cold War Assault predecessor, it loads from 100-round belts stored in metal boxes and is able to attain a rate of fire of up to 667 rounds per minute. It has a muzzle velocity of 900 m/s and is fitted with a (non-functional) integrated bipod.

A heavy duty GPMG like its American counterpart, the PKM possesses excellent stopping power thanks to its 7.62 mm round (also shared by sniper rifles like the SVD). In most cases, the PKM is capable of killing an enemy soldier in two hits at medium ranges and almost always a single shot in close quarters.

However, it is best suited for use against targets located between 400-800 metres away. One of the PKM's main downsides are its long barrel and heavy weight, both of which make it difficult to handle in close quarters.

The PKM only supports one type of "magazine". It takes up two inventory slots: 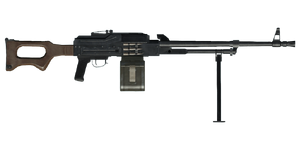 The PKM is used by several BLUFOR, REDFOR and INDFOR factions in ArmA 2.

The PKM returns once more in ArmA 2 and continues to serve as the primary GPMG of multiple factions.

The PKM still loads from loads from 100-round belts boxes and has an identical rate of fire, though its muzzle velocity has been reduced to only 850 m/s.

The PKM retains a (non-functional) integrated bipod, and does not come in any variant that has either optical accessories or muzzle attachments. It can now be zeroed up to a maximum distance of 1,000 metres.

As in Armed Assault, the PKM is best utilised at distances of between 400-800 metres.

The PKM still suffers from a lack of optical sights, meaning that despite having a theoretical effective range of 1,200 metres, its practical firing range is limited to just under 800 metres. Beyond that distance, it is next to impossible to accurately land hits on targets.

In addition, the PKM also has noticeably higher recoil than both its American and modernised Russian counterparts, which means that unless the shooter is already prone it will be extremely difficult to control while firing on full auto.

The PKM only supports one type of "magazine". It will require two free inventory slots to carry:

Metal box containing a linked belt with 100-rounds of 7.62 mm ammunition. They can be shared with the PKP and Czech UK-59. 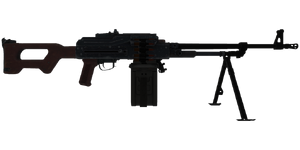 The PKM is used by both Soviet military forces and FIA guerillas in ARMA Reforger.

The PKM returns once more in Reforger as the Soviet military's GPMG counterpart to the U.S. M60.

Compared to its predecessor in ArmA 2, Reforger's PKM has a slightly lower fire rate of only 650 RPM. Its muzzle velocity has also been further reduced to only 820 m/s as opposed to 850 m/s.

The PKM cannot be suppressed with muzzle attachments and can't be fitted with optical sights. However, it does support manual zeroing starting from a minimum of 100 m up to a maximum of 1,300 m. Any adjustments are made with increments/decrements of 100 m.

Static PKMs are turret-mounted versions of the handheld PKM. Unlike its man-portable counterpart, they are exclusive to Soviet forces.

They feed from the same types of magazines and can be manually rearmed by adding fresh belts to the turreted PKM's" inventory". By default, static PKMs are always supplied with three belts to reload from. It is not possible to assign more than three magazines to the turret's "inventory".

The turret's 6T5 tripod has a limited rotation arc that permits the operator to swivel the tripod 45 degrees in either direction horizontally. Vertical rotation limits are slightly more restrictive however, allowing an elevation of 35 degrees and a depression of just 15 degrees.

Both man-portable and static PKMs are able to feed from two types of magazines. They are fully interchangeable with one another (static PKMs can be manually fed with handheld PKM magazines):

Standard 100-round linked belt stored in a metal box. It uses a mixed load that combines both LPS ball and 7T2 tracer ammunition. Every fifth round fired will be a visible tracer.

It weighs the same as the standard mixed load 100-rounder belt.