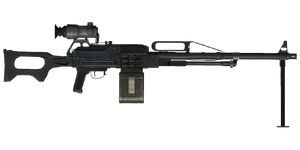 The PKP is a 7.62 mm general-purpose machine gun used exclusively by the Russian Armed Forces in ArmA 2.

The PKP is a gas operated medium machine gun that is chambered to fire the 7.62×54 mm round.

It loads from the same 100-round belt metal boxes used by the PKM, has the same rate of rate of 667 rounds per minute and has an identical muzzle velocity of 850 m/s. The PKP is only available in a single variant fitted with the 1P78 telescopic sight. It has a (non-functional) integrated bipod, but otherwise does not support being fitted with either muzzle attachments or side rail accessories.

The PKP is essentially a modernised variant of the ubiquitous PKM machine gun used by the Russian military as its standard issue GPMG. While it might be identical to the former performance-wise, the PKP is actually better in a few aspects; most notably, the use of the 1P78 optical sight.

Being magnified, it provides better clarity for the user against distant targets instead of having to rely on the PKM's barebones ironsights. It has ballistic drop compensation markers that are accurate at distances of up to 790 metres, though the PKP itself is more than capable of hitting targets well beyond that distance.

Alternately, the PKP also allows its user to aim via the PKP's own ironsights, useful in close quarters or for when the 1P78's magnified view is unnecessary. Its only drawback is that it weighs slightly more than the PKM which makes it less useful in close quarters. But in the hands of an expert, the PKP is far more effective than the PKM in providing accurate suppressive fire.

The PKP only supports one type of "magazine". It will require two free inventory slots to carry:

Metal box containing a linked belt with 100-rounds of 7.62 mm ammunition. They can be shared with PKMs.