The PM is a 9 mm handgun featured in ArmA 3 and ARMA Reforger. 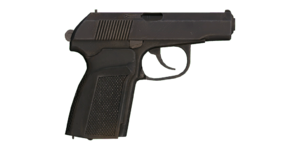 The PM is used by both the Syndikat and their L'Ensemble successors in ArmA 3. It was added with the release of the Apex DLC.

The PM is a semi-automatic handgun chambered to fire the 9×21 mm round.

It loads from 10-round box magazines and can attain a fire rate of up to 400 rounds per minute with a muzzle velocity of 315 m/s. Unlike other handguns, the PM is unable to mount any accessories or muzzle attachments.

Relatively light to wield, the PM's user can carry additional magazines either for it or other weapons. It is also very compact, allowing for easy handling in tight interiors.

Its main drawbacks are its low accuracy and range, both of which are poor even by the standards of most sidearms. Its unergonomic design also lacks night sights, which makes it difficult to aim with when there is poor visibility from darkness or bad weather conditions.

Lastly, the 9 mm bullet's stopping power and penetration is quite lacklustre and will require many more rounds to put down enemy targets wearing plate carriers. Since the PM doesn't have the ability to load extended magazines, the user will most likely need to reload twice in a fight. Needless to say, the PM isn't feasible against opponents wielding the P07 or Rook-40.

PMs only support being loaded with one type of magazine. It weighs a total of 4 "mass" units:

Standard 10-round pistol magazine. Does not contain any visible tracers. 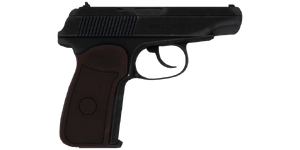 The PM is used exclusively by Soviet military forces in ARMA Reforger.

The PM returns in Reforger as the standard-issue service pistol of Soviet forces.

It now loads from 8-round magazines and its muzzle velocity has been reduced to 310 m/s. However, Reforger's PM has a greater rate of fire and can now attain a fire rate of up to 500 RPM.

Reforger's PM cannot mount optics or suppressors and does not support manual zeroing. Just like its ArmA 3 predecessor, it is limited to an effective firing range of just 50 metres.

PMs can only load one type of magazine:

8-round box magazine loaded with 9 mm ball ammunition. Does not contain visible tracers.