The PO-30 Orca is a light utility helicopter used by both CSAT forces and Russian Spetsnaz operatives in ArmA 3.

The PO-30 is a four-bladed, rotary-wing light helicopter with a fantail designed for both aerial reconnaissance and light transport duties.

Each of these wings have a single pylon on it that support dynamic loadouts.

Armament
By default, the armed version has both a minigun and DAGR pod mounted on its stub wings. The minigun has a single 2,000-round linked belt while the DAGR pod contains a total of 12 guided rockets.

But in addition to its default loadout, the armed version's dual pylons can also support other types of weapons.

Notable Traits
Quick and agile just like NATO's MH-9, the main difference (and advantage) with the PO-30 is that it actually has defensive avionics such as a Radar Warning Receiver (RWR).

It can deploy countermeasure flares to ward off incoming missiles, whereas the MH-9 would be completely helpless against such threats. Its ability to mount weapons ranging from anti-tank/anti-air missiles to rocket pods also makes it far superior to both of its NATO counterparts.

It can still transport passengers without having to sacrifice armament (MH-9), and it is able to mount a 20 mm gun pod instead of being limited to just 7.62 mm Gatling guns (AH-9).

Drawbacks
The PO-30 is not without its weaknesses. Like the MH-9, it is just as fragile due to being only lightly-armoured; despite its deceptively higher base armour values for each component. Furthermore, the PO-30's cabin is not bullet-resistant and can easily be penetrated by non-7.62 mm/12.7 mm gunfire. Any large calibre munitions can and will disable or outright destroy the aircraft with just a few shots.

As with the Mi-48, it also retains a somewhat distinctive (and loud) rotor sound which can be easily identified from many kilometres away.

Crew Capacity
Regardless of the variant, the PO-30 always has a seating capacity of ten personnel (including the crew). This consists of the pilot and co-pilot, and up to eight passengers in the rear compartment. 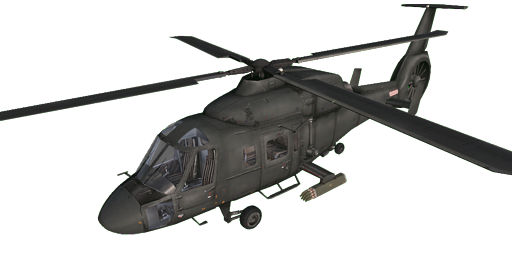 It is armed with a 6.5 mm minigun and rocket pod mounted on the end of stub wings fixed onto both sides of the fuselage. This variant can transport up to eight passengers. 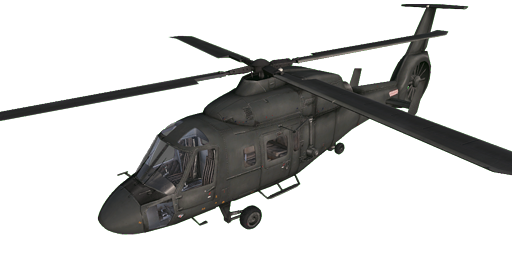 The two stub wings are removed on this version but it remains otherwise identical to the baseline helicopter (functionality-wise).

Both variants of the PO-30 retain base armour values of 40.

Hull damage is calculated based on the integrity of other components on the PO-30. Until all other parts of the helicopter have been critically damaged, the hull itself can never be "destroyed".

Each of the PO-30's engines can survive 40 points of damage (there are two in total). They take 300% increased damage from high-explosive (HE) type munitions.

If damaged: Reduced power output and makes it difficult to gain both speed and altitude.
If destroyed: Can potentially blow up the PO-30 instantly if overall status of helicopter is at critical.

If damaged: Gradually leaks fuel over time; up to 50% of remaining capacity.
If destroyed: All fuel depleted after several seconds.

Consists of the pilot/co-pilot flight instruments, Multi-Functional Displays (MFD) and Helmet Mounted Display (HMD). They can incur 80 points of damage before failing.

If damaged: Occasional flickering of MFDs and HMD. Other instruments remain unaffected.
If destroyed: MFDs and HMD disabled. Instruments will malfunction and may not display proper readings.

The main rotor can survive 180 points of damage before failure. It takes 250% increased damage from HE-type munitions.

A disabled main rotor makes it increasingly difficult to maintain the PO-30's lift. Unless the tail rotor has also been disabled however, the PO-30 can still be (reasonably) controlled at low airspeeds.

The tail rotor can resist 120 points of damage before failure. It takes 600% increased damage from HE-type weapons.

A disabled tail rotor will drastically increase torque from the main rotor. At low airspeeds, the PO-30 will become extremely difficult to control due to constant yaw shifting to one side.

Designed exclusively for transporting troops, the PO-30 has only one type of sensor available:

The PO-30 does not use an active radar as it does not have any weapon systems that would require one.

The PO-30 does not have the ability to detect targets visually or through IRST.

The PO-30 does not have the ability to lock onto laser marks or infrared strobes.

NOTE: Only the weapons used on the default loadout for the PO-30 are listed here. For full details on ordnance that can be mounted on the PO-30, refer to the dynamic loadouts article.

All weapon systems on the armed variant are controlled exclusively by the pilot:

Due to the PO-30 lacking an Infrared Search and Track sensor module, fired DAGRs can only be guided via MCLOS or through laser lock-on.

The PO-30 has a maximum lifting capacity of 2000 kg, and is able to slingload and transport a variety of light vehicles and equipment.

The PO-30's capabilities are comparable to that of the AAF's Hellcat helicopter, which essentially means its lifting options are quite lacklustre. It cannot transport any moderately heavy vehicles for instance, and the PO-30's engines will be greatly taxed regardless of its weight's cargo.

Note that both variants of the PO-30 (armed and unarmed) have the same maximum load capacities.

Crashed PO-30 with a Black scheme. This variant is specifically operated by Russian Spetsnaz units.

Promotional screenshot released during the pre-Alpha showing a PO-30 offloading a squad of CSAT soldiers.