The PP-19 Bizon is a 9 mm submachine gun featured in ArmA: Cold War Assault and ArmA 2. 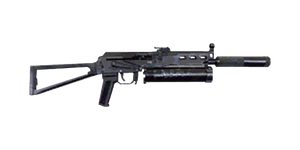 The PP-19 Bizon is a selective-fire submachine gun that operates from a closed bolt design. It is chambered to fire the 9×18 mm cartridge.

It loads from 64-round helical magazines, and can achieve a maximum fire rate of up to 857 rounds per minute with a muzzle velocity of 400 m/s. The Bizon is fitted with an externally attached suppressor by default.

Exclusively wielded by the Soviet Spetsnaz, the Bizon is essentially the Soviet counterpart to the American MP5SD3 submachine gun. Like the MP5, the Bizon is fitted with a sound suppressor which makes it ideal for use in missions that require a silent firearm.

Compared to the MP5, the Bizon is almost identical handling-wise and similar in terms of recoil. The main difference is its larger magazine size of 64 rounds versus the MP5's 30, which makes it deadlier in close quarters.

Performance-wise however, the Bizon is completely outmatched by the MP5SD3 and has a greatly reduced effective range of just 100 metres. It also has poorer accuracy due to its low muzzle velocity. However, its biggest downside stems from its 9 mm round; unlike the MP5SD3, the Bizon's stopping power is pitiful - depending on where the bullets land, it may take anywhere from three or four direct hits to the chest to kill.

Overall, this makes the Bizon a completely inferior SMG to the MP5SD3. Its only saving grace is that it loads from a 64-round magazine but this upside is offset by its low damage, requiring additional shots to be fired at a target regardless and defeating the purpose of its large magazine.

The Bizon only supports one type of magazine. It requires one free inventory slot to carry: 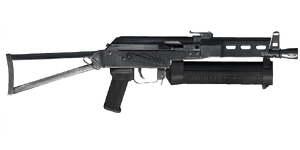 The PP-19 Bizon is used exclusively by Russian Spetsnaz operatives in ArmA 2.

Like its Cold War-era predecessor, the PP-19 Bizon is a straight-blowback, selective-fire submachine gun that is also chambered to fire the 9×18 mm cartridge.

It still loads from 64-round helical magazines, and can achieve a maximum fire rate of up to 857 RPM with a muzzle velocity of 350 m/s. The Bizon does not support any optical sights or miscellaneous accessories, but does come in a separate variant that is fitted with a sound suppressor by default.

Once again exclusively utilised by the Russian Spetsnaz like its Cold War Assault predecessor, the ArmA 2 Bizon is the Russian counterpart to the newer MP5A5 submachine gun used by the USMC.

Unlike its previous iteration however, the ArmA 2 Bizon's damage is comparable to the MP5A5 and also has similar accuracy, which makes it much better than its predecessor.

What makes the Bizon truly unique is its recoil system. Unlike with other SMGs, the Bizon's recoil is almost completely unnoticeable even when firing on full auto. This low recoil combined with its large magazine, is what grants the Bizon its firepower advantage over the MP5.

However, the Bizon is redundant in the face of 5.56 mm/5.45 mm carbines like the M4A1 and AKS-74U for obvious reasons such as range and accuracy. This is mostly due to its 9 mm rounds (which are the same as the ones used by the Makarov pistol) lacking sufficient energy to retain its stopping power beyond 100-150 metres.

Nonetheless, in urban and close-quarter environments the Bizon remains as formidable as any carbine; provided that it's used properly. 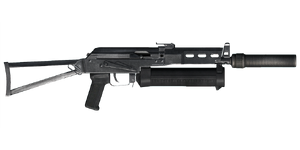 The PP-19 Bizon SD is simply a suppressed version of the baseline Bizon SMG.

As with its parent weapon, it is also chambered to fire the same 9×18 mm round but uses special subsonic ammunition that can only be loaded by the PP-19 Bizon SD (the magazines themselves are not interchangeable).

Aside from its lower muzzle velocity of 320 m/s and the sound suppressor making it even more quieter to fire, it is virtually identical to the baseline Bizon in every other way.

The unsuppressed Bizon can load two types of magazines, while the suppressed variant is restricted to loading one type only. Both require one free inventory slot to carry:

Alternate magazine loaded with reduced velocity ammunition. Rounds fired from this magazine specifically have a lower muzzle velocity of 320 m/s.

This is the only magazine that can be loaded by the PP-19 Bizon SD.