Pickups are used by both Sahranian civilians and Black Element PMCs in ArmA: Armed Assault.

The Pickup is a 4x4, 2-door offroad truck with a cab chassis.

Largely comparable to its bulkier counterpart configuration-wise, the Pickup serves as a fairly rugged offroad-capable truck.

There are few differences between the two aside from minor handling quirks, as both are outfitted with the same armament loadout options.

Mobility
The Pickup is similar to the Offroad in that both vehicles excel at travelling across rough terrain but have difficulty maintaining control on sharp turns. Care should still be taken as the Pickup is prone to rollovers on steep terrain.

While not particularly fast, the Pickup does have decent acceleration and can comfortably reach its maximum (not top) speed of 150 km/h on a flat surface.

However, it should be noted that civilian Pick-Ups are much slower and cannot drive as fast as the armed mercenary versions.

Crew Capacity
All Pickup variants have a maximum seating capacity of two, which supports both the driver and a single passenger who sits alongside them inside the cab. Armed versions support a single gunner, who controls the roof-mounted MMG from the rear flatbed. 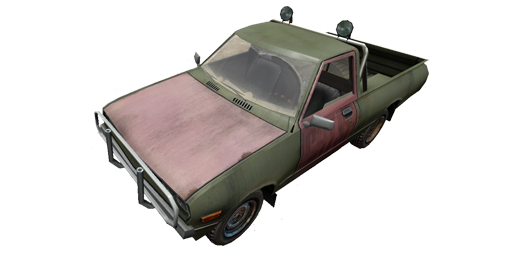 Baseline unarmed civilian model. The rear flatbed can be fitted with either a hard-top cover or tube frame.

It can transport only one passenger in the front-right seat (inside the cab). 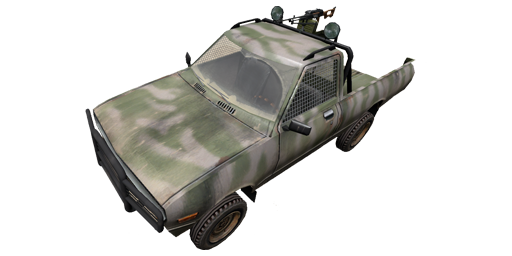 It is fitted with a forward-facing 7.62 mm medium machine gun with a restricted horizontal rotation arc. The mounted PK MMG feeds from 100-round belt boxes, and is pre-loaded with one by default. The gunner has access to five spare belt boxes, totalling to a combined amount of 600 rounds.

It transports the same number of passengers as the baseline model. 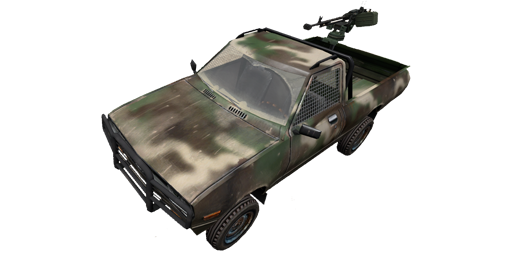 The DShKM is pre-loaded with one 50-round belt box and carries a further five spares in reserve, for a combined total of 300 rounds. It transports the same number of passengers as the PK-armed variant.

All variants of the Pickup have base armour values of 20.

The engine can survive 8 points of damage before failure.

The fuel tank can only take 6 points of damage before rupturing.

The tyres on Pickups will burst if they take more than 3 points of damage.

The weapons on all variants are controlled exclusively by the gunner:

It can attain a fire rate of up to 800 rounds per minute with a muzzle velocity of 900 m/s. Accuracy-wise, the PKT has a dispersion of 0.003 rad at distances of up to ~ 700 metres away. It takes 7 seconds to reload another belt box.

12.7 mm heavy machine gun. Useful against infantry, unarmoured/lightly-armoured ground vehicles as well as low-flying helicopters at distances of up to 1,200 metres.

It has a fire rate of 600 RPM, a muzzle velocity of 850 m/s, and takes a total of 10 seconds to reload a fresh belt box. Accuracy-wise, it has a fixed dispersion of 0.002 rad regardless of range.

Pickups are used by several REDFOR and INDFOR factions, as well as with Chernarussian/Takistani civilians in ArmA 2.

Features
As with its predecessor, it is available in up to three variants aside from the open-bed baseline model. This includes an armed variant fitted with a 7.62 mm medium machine gun fitted above the cab's roof.

Two more civilian models are also available which feature an assortment of components ranging from a roof cover for the truck bed, as well as a roll cage and tubed frame.

The Pickup is predominately used by the citizens of both Chernarus and Takistan, and is also popular with guerilla organisations and rebel groups across the Green Sea region.

Just like in Armed Assault, it is analogous to the slightly bulkier Offroad. However unlike the Offroad, it doesn't have a recoilless rifle and is restricted to utilising just a 7.62 mm-chambered machine gun.

Furthermore, it no longer has a dedicated sub-variant armed with a 12.7 mm heavy machine gun, rendering the Pickup's overall utility even more limited.

Crew Capacity
As before, all Pickup variants contain enough seats for a crew of two, consisting of both the driver and a single passenger. Armed versions still support just a single gunner who handles the roof-mounted MMG. 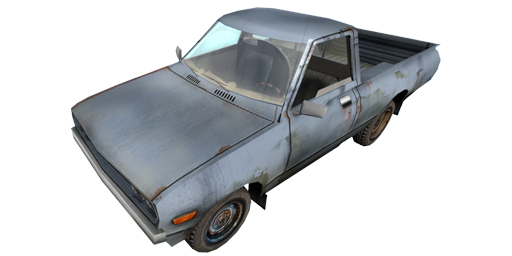 Baseline variant with an open rear bed. Can transport a single passenger in the cab. 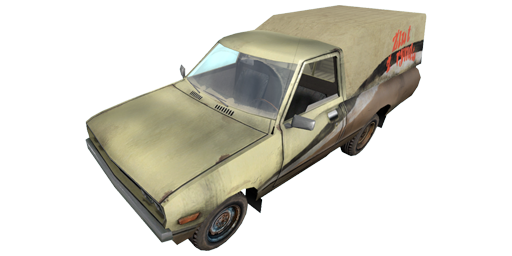 Identical to the regular Pick-Up but has a hard roof covering the rear bed. Contains the same number of seats. 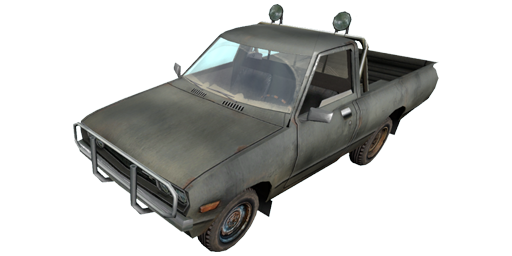 Identical to the regular civilian Pick-Up but has a roll cage/tubed-frame attached to the rear of the cab and bed.

Also contains the same number of seats as the Covered variant. 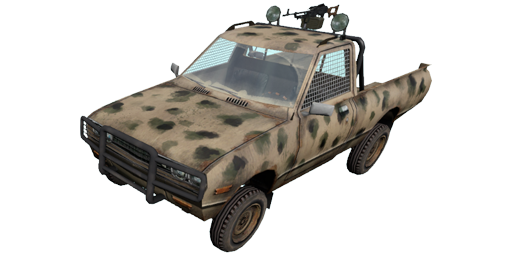 Armed variant that has a PKT 7.62 mm MMG fitted to the roof of the cab. The PKT is pre-loaded with one belt box and has a further five more boxes spare (for a total of 600 rounds).

Has the same number of seats as the baseline variant but supports a single gunner.

All Pickups have base armour values of 20.

Hit zones remain identical regardless of the flatbed's contents.

The vehicle's hull can incur up to 20 points of damage.

The engine can only take 8 points of damage before failing. At least 20% of damage is shared with the Pickup's main "health" pool.

A damaged engine will prevent the Pickup from attaining its top speed.

The fuel tank can withstand just 6 points of damage before rupturing. Damaging the fuel tank will cause the Pickup to gradually leak fuel.

Each tyre can only take 6 points of damage before bursting.