The Proving Grounds is a playable terrain in ArmA 2. It was added with the release of the Private Military Company DLC.

Located in the western provinces of Takistan, the Proving Grounds are all that remains of what used to be the site of a nuclear weapons programme initiated by the former Takistani regime.

The surrounding area is partially contaminated with radiation as a result, though levels have fallen low enough in recent years to allow for humans to approach the area with (relative) safety.

The Proving Grounds' total dimensions are quite small, clocking in at a meagre 4 square kilometres only.

Stretching out towards the direction of Ardistan to the country's west, the terrain in the surrounding region is radically different from the dry desert conditions to the east and south. Dense clusters of vegetation thrive in the area due to the temperate climate, though much of it has been contaminated by radiation.

A dried up creek also runs through the lower half of the Proving Grounds. It is quite steep however, and should be crossed via the steel bridge built to support the roadway running through the area.

There are no established settlements in the area, having long since been abandoned by the civilian population after the region was contaminated by excessive radiation.

Only the derelict remains of a gas station and the (now sealed) OKB-754 research facility can be found, along with numerous rusted wrecks and other traces of civilisation.

OKB-754 was the central hub of Takistan's secret nuclear weapons programme, which reached its peak in the late 1990s following the successful detonation of a 5-10 kiloton device.

However, the programme was forced to a grinding halt when the international community placed sanctions on the Takistani government over its flagrant violations of treaties surrounding nuclear weapons testing.

In 1999, the test site was devastated by an underground detonation which exceeded the expected yield. Breaching the surface of the ground, a small quantity of radiation leaked and immediately dispersed around the region, inflicting much damage upon the local habitat. All locals were subsequently forced to abandon the region out of safety concerns. 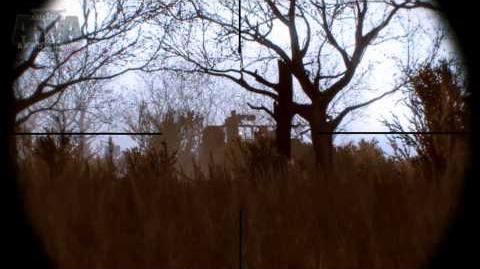