The Prowler is a Light Strike Vehicle used by both NATO forces and CTRG operatives in ArmA 3. It was added with the release of the Apex DLC.

Primarily designed for use by special operations units, the Prowler is a lightweight, air transportable, highly mobile platform that can be configured for a variety of missions.

Features
It is available in three variants; a baseline unarmed version that has no weapons mounted on it, and two separately armed versions that have either a heavy machine gun or anti-tank missile launcher mounted onto the turret ring.

Both armed versions have a forward-facing medium machine gun fitted to front where the commander's seat is. Prowlers can be airlifted by V-44X vehicle transports, as well via slingloading with CH-67 and UH-80 helicopters.

Mobility
In contrast to its CSAT counterpart, the Prowler is slightly faster and has better control on rough terrain. However, the armed Prowler has to sacrifice multiple passenger seats in exchange for possessing heavier firepower.

Crew Capacity
Passenger capacity will vary depending on whether the variant is armed or not.

At the bare minimum, all models will support at least a driver, a passenger in the front-right seat who doubles as the vehicle's "commander" on armed variants, along with a third in the turret ring "seat" who either controls the mounted weaponry or can fire their own weapon while standing up. 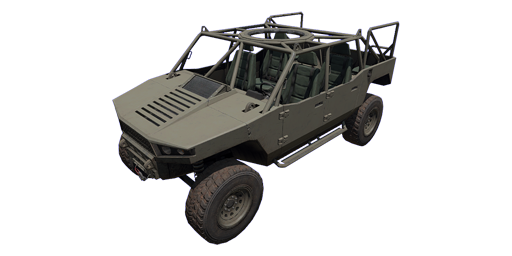 It has enough seats to transport up to six passengers, one of whom sits in the (weaponless) turret ring. All passengers are capable of firing out of the vehicle, but the vehicle itself is otherwise completely unarmed. 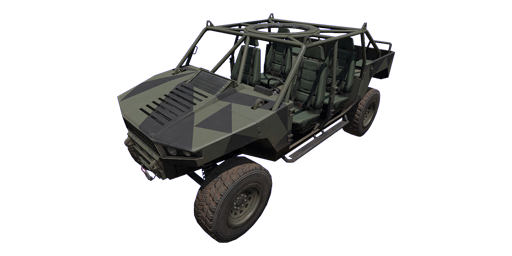 Virtually identical in performance and capability to the baseline vehicle. The sole difference is that this variant has both its passenger doors and rear cages removed. 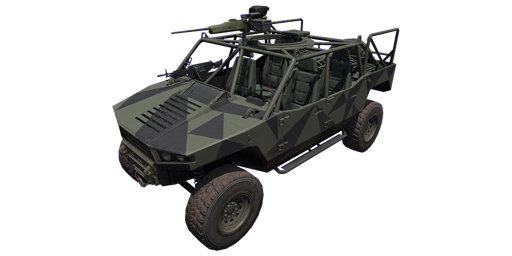 Armed variant of the Prowler.

It can only transport up to two passengers (not including the gunner and commander) and instead has a Mk30 heavy machine gun mounted externally onto the turret ring located in the centre of the vehicle.

The Mk30 comes pre-loaded with a single 100-round belt box of .50 cal ammunition, and has additional belt boxes stored in reserve worth up to 200 rounds (for a total of 300 rounds). 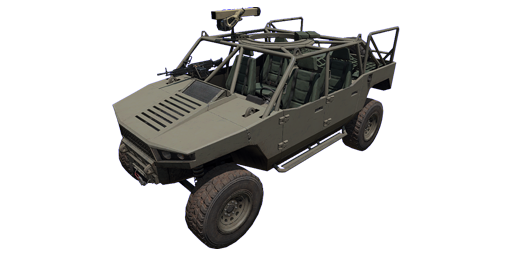 Identical to the HMG variant but has the turret ring fitted with a Titan MPRL Compact missile launcher instead.

The Titan is pre-loaded with a single missile by default and has a further five missiles to reload from (for a total of six). It transports the same number of passengers as the HMG variant.

(*) The commander (in the front right seat) on both variants can utilise the SPMG medium machine gun. It is loaded with a 130 round belt bag of .338 NM rounds by default, and has a further 260 rounds worth of belt bags in reserve.

All variants of the Prowler have base armour values of 80. They cannot be fitted with either Explosive Reactive Armour blocks/panels nor slat cages.

The following highlighted positions serve as weak points on Prowlers:

Hit zones are identical across all models regardless of configuration.

The vehicle's body is only able to incur up to 40 points of damage. It suffers from a 150% damage penalty to high-explosive (HE) type weapons.

A catastrophic loss will not occur unless the Prowler is in critical status.

The Prowler's hull can survive 120 points of damage. It takes 50% less damage from HE-type weapons.

No amount of damage against the hull is transferred onto the Prowler's main "health" pool.

The engine can only incur 64 points of damage before failing. It will not cause a catastrophic kill by itself unless the Prowler is in critical status.

50% of incoming damage on the engine is always transferred onto the Prowler's "health" pool. It has 50% resistance against HE-type munitions.

If damaged: Reduces power output, acceleration is decreased and it may become impossible to climb uphill.
If destroyed: Instantly immobilises the Prowler.

The fuel tank can only survive 20 points of damage before rupturing.

50% of incoming damage onto the fuel tank is always transferred to the Prowler's "health" pool. It takes 150% damage from HE-type weapons. A destroyed fuel tank will not cause a catastrophic kill unless the Prowler is critically damaged.

If damaged: Gradually leak up to 50% of fuel over time.
If destroyed: Depletes entire fuel capacity over the course of a few seconds.

All four wheels are able to resist 150 points of damage.

They are susceptible to small arms fire and take 400% damage from explosive-type damage, meaning any HE-type munitions or landmines can instantly pop them. No amount of damage inflicted is transferred onto the Prowler's main "health" pool.

Destroying all the wheels will be needed to immobilise the entire vehicle. Depending on which and how many are remaining, it is entirely possible for the Prowler to continue driving even with three out of four tyres missing (though making simple manoeuvres will be almost impossible).

The Prowler's gunner always controls the weapon systems mounted above the turret ring. In the case of the unarmed variants, passengers on the turret ring and front right co-driver's seat can fire out the vehicle with their own weapons:

NOTE: Only available on the Prowler (HMG) variant.

The Mk30 .50 heavy machine gun can attain a fire rate of 500 rounds per minute and has a muzzle velocity of 910 m/s, but requires 10 seconds to reload a fresh belt box. Accuracy-wise, it has a fixed dispersion of 0.00096 rad at all ranges.

The Fire Control System supports automatic zeroing only against stationary targets, and requires 1 second to finish adjusting its zero. The gunner can also opt to manually zero, though it is limited to 100 m increments up to 600 m before jumping to 800 m, 1000 m, 1200 m and a maximum of 1500 m.

The turret can be fully swivelled in all directions horizontally, but is vertically limited to a maximum depression of 10 degrees and an elevation of 40 degrees. For optics, the sight features an integrated laser rangefinder and has variable zoom capability, but can only toggle between a day or night vision mode.

NOTE: Only available on the Prowler (AT) variant.

The launcher can switch between either a direct fire or top-attack flight profile for its missiles. It takes 3 seconds to lock onto a target and 8 seconds to reload a fresh missile.

There is no limit to rotation horizontally, but it is vertically restricted to a maximum depression of 20 degrees and an elevation of 30 degrees. The Command Launch Unit (CLU) features a laser rangefinder and has two magnification modes. It can toggle either a day or black-hot/white-hot thermal vision mode.

The missile seekers are infrared-guided but can only lock onto targets moving at speeds of 126 km/h or less. It supports SACLOS guidance, but only up to a maximum distance of 2,000 metres. They have an initial launch velocity of 36 m/s and can reach speeds of up to 180 m/s in mid-flight. Smoke countermeasures have a 60% chance to confuse the seeker (for autonomous guidance only).

NOTE: Only available on the Prowler (HMG) and Prowler (AT) variants.

Fitted to the co-driver's (commander) seat, the SPMG is forward-facing only and cannot be fully rotated in all directions.

AT variants of the offroad vehicles included with the release of the Tanks DLC. The Prowler (AT) can be seen on the top-right.