The RHIB is used exclusively by the U.S. Army in ArmA: Armed Assault.

Powered by twin diesel engines, the RHIB is an armed rigid-hulled boat. Its duties include coastline patrol, surveillance and resupply of special operations forces, and transporting personnel to and from ships.

Features
It is available in two variants; the baseline armed vessel with a single heavy machine gun turret or a second variant which also possesses the forward-facing HMG, but also retains a secondary 40 mm automatic grenade launcher fitted to its rear.

A simple rigid hull boat designed for patrolling littoral waters, the RHIB serves as the U.S. Army's answer to the need for a speedy waterborne transport that can land or pickup an entire squad's worth of soldiers from the beaches of Sahrani.

As the sole armed vessel in Armed Assault, the RHIB has no peers and can easily gun down SLA PBXs without fear of retaliation.

Against armed ground vehicles however, the RHIB's crew and passengers stand little chance of survival due to their obvious lack of armour plating and enclosed covers.

Except for landing troops ashore, the RHIB should never be utilised for direct combat against any ground threats that can fight back.

Crew Capacity
Transportation capacity varies depending on the RHIB's configuration, but it will always support a crew of two consisting of the front gunner and the boat driver themselves. 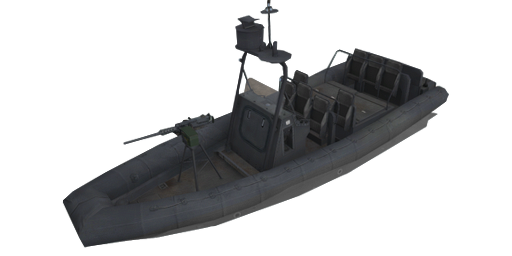 The RHIB's M2 .50 cal heavy machine gun is pre-loaded with one 100-round belt box by default. The gunner has access to two additional belt boxes in reserve, granting a total ammunition amount of 300 rounds.

It can transport up to ten passengers at a time. 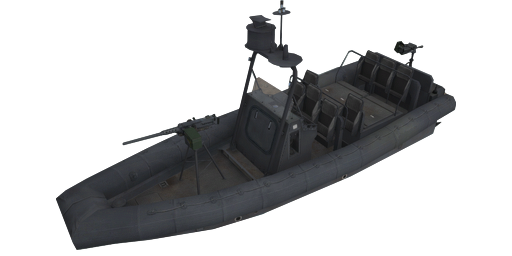 Alternate armed variant outfitted with a second turret in the rear of the hull.

The front gunner retains access to the same armament and ammunition loadout of the baseline RHIB, but the rear gunner's Mk. 19 automatic grenade launcher has one 48-round grenade belt loaded with 40 mm high-explosive (HE) grenades. They have a further three belts spare, for a combined total of 192 grenades.

Unlike the baseline RHIB, it should be noted that the 2 Turrets variant is restricted to carrying only seven passengers at a time.

Both RHIB variants have base armour values of 30.

RHIB hulls can withstand up to 30 points of damage before their integrity fails.

The engine on both variants is only able to take 36 points of damage before their destruction. A wrecked engine will prevent the RHIB from moving unless repaired.

The heavy weapon turrets on both variants can only incur 24 points of damage before being disabled. "Disabled" turrets can still fire but cannot be swivelled in any direction.

The gunner commands the M2 heavy machine gun on both variants. Only the 2 Turrets variant has a rear gunner who mans the Mk. 19 automatic grenade launcher:

NOTE: Only available on the RHIB (2 Turrets) variant.

The RHIB is used exclusively by the U.S. Marines in ArmA 2.

Returning from Armed Assault, the ArmA 2 RHIB continues to serve in roughly the same roles and configurations of its predecessor.

Features
It is still available in two variants, both featuring a forward-mounted M2HB .50 cal heavy machine gun that can be rotated in all directions.

The standard transport model can transport up to ten passengers, while a second variant has a rear-facing, MK19 40 mm grenade launcher that has a fixed aiming arc that transports three less passengers (for a total of seven only).

The RHIB serves as the USMC's sole waterborne craft that allows it to transport Marines to and from shores, acting as a speedier (albeit non-amphibious) alternative to the tracked AAVP-7A1 APC. It can also be used as a maritime patrol vessel to guard against enemy infiltration attempts by boat.

Once more, the RHIB is the sole armed vessel in ArmA 2. As such, it does not have a directly comparable counterpart to it. It's slower than the smaller Russian-made PBX and the USMC's own CRRC while having more sluggish handling at slow speeds. At the same time, it handles better than civilian boats and can transport more passengers.

When it comes to armament and protection, the RHIB is somewhat comparable to the AAVP-7A1 but because of its open design, leaves its passengers exposed to being injured or killed by enemy fire. The latter on the other hand, protects its riders since they sit in a concealed compartment. This essentially forces the RHIB to rely on its speed to avoid taking damage, as it won't last long in direct combat against most threats.

Overall, the RHIB occupies a very specific niche in the USMC's inventory. It's not quite the ideal choice of transport when attempting to land on shores guarded by an enemy force, but will still be able accomplish its task (even if it means risking the safety of its occupants).

Crew Capacity
Both variants of the RHIB have a crew that consists of the driver and a gunner (two in the case of the MK19 model). Transportation capacity varies depending on the choice of armament, but it will always seat a minimum of seven passengers regardless of the variant. 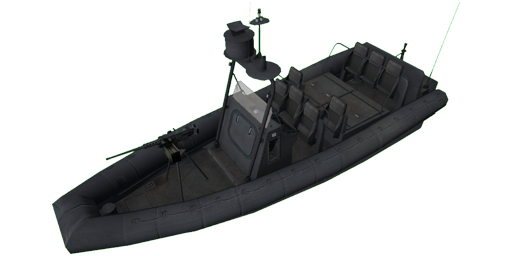 Is only armed with an M2HB heavy machine gun. The .50 cal HMG always has a single belt box of 100 rounds loaded, and has two more boxes left in reserve.

Can transport up to ten passengers. 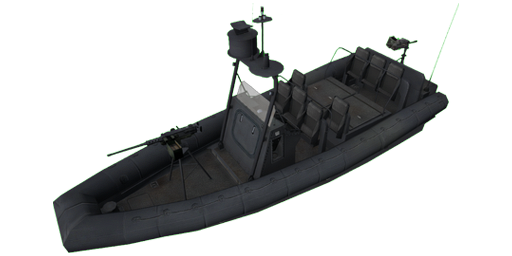 Mostly identical to the baseline RHIB but has a second turret mounted to the rear that is armed with a MK19 40 mm AGL, which feeds from 48-round belts with grenades that use high-explosive dual purpose (HEDP) warheads. It is pre-loaded with one belt by default, and has a total of three more belts to spare.

It can only transport up to seven passengers.

Both RHIB variants have base armour values of 30.

RHIB hulls can withstand up to 30 points of damage before their integrity fails.

The engine on both variants is only able to take 36 points of damage before their destruction. A wrecked engine will prevent the RHIB from moving unless repaired.

The heavy weapon turrets on both variants can only incur 24 points of damage before being disabled. "Disabled" turrets can still fire but cannot be swivelled in any direction.

The gunner controls the front-mounted M2HB HMG on both variants, while the rear gunner mans the rear-mounted MK19 AGL:

NOTE: Only available on the RHIB (MK19) variant.

Can attain a fire rate of 400 RPM and has a muzzle velocity of 240 m/s. 6 seconds are required to reload grenade belts. The MK19 has a firing range of between 450 up to a maximum of 1,500 metres. Accuracy-wise, it has a dispersion of 0.006 rad for targets at all distances.

The RHIB is used by Tanoan civilians, Syndikat rebels and their L'Ensemble successors in ArmA 3. It was added with the release of the Apex DLC.

Fielded by many nations and organisations as a light, versatile boat, the ArmA 3 RHIB uses a hybrid design that consists of a reinforced fibreglass hull and an inflatable gunwhale/collar constructed of reinforced fabric.

Features
Boasting an impressive top speed of up to 95 km/h, the RHIB can cut its way through the water with relative ease and handles just as smoothly as the Speedboat when it comes to turning and acceleration. It is also capable of transporting two more passengers compared to its smaller counterpart, the Assault Boat, which can only carry four at a time (not including the driver).

Though the RHIB does not possess any weaponry by itself, all passengers are able to fire their own weapons regardless of where they are seated.

Drawbacks
Unlike its ArmA 2 predecessor, RHIBs have lost their mounted weapons. Though this is somewhat compensated by the addition of FFV capabilities for the riders, this prevents RHIBs from providing fire support for its passengers once they're unloaded from the craft.

Much like the Speedboat, the RHIB is also too heavy to be lifted by smaller helicopters like the WY-55. Fortunately, it can still be airlifted via slingloading with either the Huron or Mi-290 heavy-lift helicopters.

Crew Capacity
The RHIB has a seating capacity of up to eight personnel (including the driver). Besides the driver, all of the passengers either crouch or sit in the centre and on both sides of the craft.

RHIBs have base armour values of 50.

The hull can only withstand 30 points of damage. Depletion of the hull's integrity will not result in a total loss unless the RHIB is critically damaged.

RHIB engines can take up to 60 points of damage before failing. Destroying the engine can potentially result in the RHIB exploding but the vessel itself must already be at critical.

Preview of the RHIB as seen in the "Scanning The Horizon" video released by Bohemia Interactive in 2016.