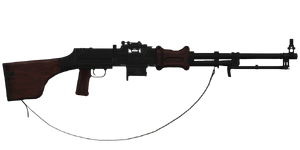 The RPD is a 7.62 mm light machine gun used by several BLUFOR and REDFOR factions in ArmA 3. It was added with the release of the S.O.G. Prairie Fire Creator DLC.

The RPD is a belt fed, gas operated light machine gun that uses a long stroke gas piston. It is chambered to fire the 7.62×39 mm round.

RPDs have integral bipods but do not possess the ability to mount optical scopes, bayonets nor sound suppressors. However, their ironsights can be adjusted starting at a zeroing of 100 metres up to a maximum of 1,000 metres (adjustments are made in increments of 100 metres). 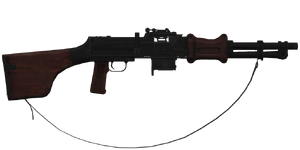 This variant is a customised model carried exclusively by El Cid of MACV-SOG.

Unlike the baseline RPD, it has a sawn-off barrel, sight and bipod. It is slightly less punishing on the user's stamina thanks to the shaving of 40 "mass" from the weapon itself.

However, recoil and inertial penalties remain unaltered from the baseline RPD. The shorter barrel also significantly reduces its accuracy by up to 40%. Furthermore, the lack of ironsights forces the RPD to use a fixed zeroing of 100 metres which cannot be adjusted. 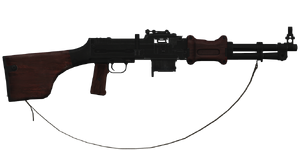 The Shorty variant is statistically and functionally identical to El Cid's personalised RPD.

As such, it lacks the ability to zero beyond 100 metres and no longer has an integral bipod. Likewise, its accuracy is sharply reduced compared to the parent RPD though unlike the El Cid variant, the ironsight remains intact and can still be used to aim with.

The RPD (High) is a static defence version of the RPD.

It is mounted onto a raised tripod and is statistically identical to handheld RPDs. Static RPDs are always pre-loaded with a single 100-round drum but have access to a further ten spare drums, providing a total ammunition count of 1,100 rounds.

The tripod can be swivelled in all directions horizontally but is limited to a vertical elevation/depression limit of 30 degrees.

Disassembling the turret will separate it into two components: the weapon bag itself, and the tripod. Static RPDs cannot be assembled from handheld RPDs as the two are mutually exclusive platforms.

Handheld RPDs can load from two types of drum magazines while static RPDs are limited to just one:

Every fourth round fired will be a visible tracer round. Only the last five rounds of the belt will consistently comprise of tracers.

Extended capacity 125-round magazine used exclusively by MACV-SOG operators. It weighs a total of 44 "mass" units.

Unlike conventional 100-round drums, this "magazine" specifically uses a mix of one visible tracer for every two rounds fired.