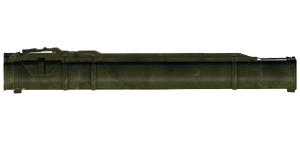 The RPG-18 is a 64 mm rocket launcher used by both the Russian Armed Forces and Takistani Army, as well as in limited numbers with ION PMC contractors in ArmA 2.

It can only be loaded with 64 mm grenades fitted with high-explosive anti-tank (HEAT) warheads, and is accurate up to a maximum distance of 200 metres. The RPG-18 is not fitted with any optical sights or electronic sensors, and only uses a simple ladder sight. The sight itself cannot be zeroed.

Designed to complement the larger RPG-7V, the RPG-18 serves as a compact and lightweight anti-vehicle weapon that is fairly effective in close quarters against light-medium armoured vehicles.

For all intents and purposes, the RPG-18 is essentially the Russian equivalent of the American-made M136. Both are similar in appearance but is slightly lighter to carry, and utilises a flip-up sight which provides better clarity as opposed to the latter's obstructive ironsight.

Unfortunately, the RPG-18 also shares many of the M136's drawbacks and has several more caveats impeding its usefulness. A prime example is the RPG-18's smaller-sized HEAT grenade, which is weaker in comparison and can barely punch through the armour of Infantry Fighting Vehicles like the M2A3 Bradley.

On the other hand, its warhead is unable to inflict any lasting damage against heavy Main Battle Tanks such as the M1A2 TUSK; save for perhaps blowing one of its tracks with a direct hit. The RPG-18 is also restricted to a maximum range of 200 metres, which is 50 metres short of the M136's minimum effective range (the M136 is capable of hitting targets further out than 250 metres).

When compared to the RPG-7V, the RPG-18 has no utility outside of being an AT weapon. The RPG-7V has a wide array of munition types for the user to choose from, and can become an anti-personnel, anti-structure, or anti-vehicle weapon with one simple switch of a grenade.

Overall, these factors contribute to the RPG-18 being a mostly redundant weapon in almost every situation. Unless there is no alternative, the RPG-18 should be overlooked in favour of better shoulder-launched weapons.

The RPG-18 only supports one type of grenade round. It requires six free inventory slots to carry:

The round is launched with an initial velocity of 115 m/s and will consistently remain at this speed for the entirety of its flight. The warhead itself has a blast radius of just 1 metre.