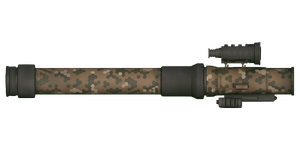 The RPG-42 Alamut is a 105 mm rocket launcher used by several BLUFOR, REDFOR and INDFOR factions in ArmA 3.

It has an integral night vision sight with a magnification strength of 2x and ballistic stadia accurate at ranges of up to 500 metres. The launcher's optical sight cannot be manually zeroed.

A general-purpose shoulder-fired launcher, the RPG-42 is the primary armament of CSAT medium anti-tank weapons teams. It is a relatively simple-to-use launcher that can be brought to bear against both vehicles and infantry.

The RPG-42's grenades are relatively lightweight to carry, which means that the operator need not bring heavier backpacks like the Carryall to stow munitions (as opposed to heavier guided launchers like the Titan or NATO's PCML).

In contrast to the RPG-7, the RPG-42's 105 mm grenades are powerful enough to take out Armoured Personnel Carriers and Infantry Fighting Vehicles in a single hit. Even heavily armoured vehicles such as Main Battle Tanks are vulnerable if the RPG-42's PG-42V grenades strike their optics, engines, tracks, or other exposed components - though it will struggle to achieve anything more than a mobility/mission kill without the tank already being damaged.

The main drawback to the RPG-42 stems from its lack of guidance. Unlike its NATO counterpart, the RPG-42 is unable to lock onto vehicles and relies solely on the user's ability to lead and adjust for the target's velocity in order to land hits.

Another issue is that the RPG-42's munitions are not multi-role capable. The PG-42V tandem charge warhead is strong against vehicles but is near ineffective against infantry due to extremely poor area of effect damage, even when close together.

On the other hand, TBG-42V grenades are highly effective against infantry across a wide area regardless of spacing, but will deal almost no damage to armoured vehicles; aside from perhaps disabling unarmoured components (and even then only with a direct hit). As such, the user must decide on whether to exclusively carry anti-personnel HE grenades or anti-vehicle AT rounds. Alternatively, they can choose to haul a mixture of both round types simultanously, but this in turn results in a lowered total amount of HE/AT grenades overall.

Lastly, the RPG-42's operator must manually switch between munition types if they run up against a threat that their currently loaded grenade is incapable of tackling.

This can become problematic if the user's squad is ambushed by enemy infantry (for example); the amount of time needed to swap from an AT grenade to a HE round could result in disastrous consequences for the user. In stark contrast, the PCML's missile is multi-purpose and can be universally employed against both infantry and vehicles (though with reduced effectiveness compared to the RPG-42's dedicated grenades).

The PG-42V combines a penetrator with a shaped explosive charge, which grants it armour piercing as well as explosive capabilities. It is ideal for use against light-medium armoured vehicles such as MRAPs or IFVs like the AMV-7 Marshall.

Against heavily armoured vehicles like the M2A4 Slammer UP MBT, its usefulness drops off somewhat since the penetrator isn't actually powerful enough to bypass through the frontal armour. Vehicles outfitted with slat cages will also tend to nullify the effects of the initial blast as well, though the penetrator can still go through depending on the impact angle.

It is always advisable to hit heavy armour in the rear where the armour is weakest, or against the tracks/wheels in order to inflict a mobility kill.

The PG-42V has an effective range of up to 500 metres and an absolute maximum of 700 metres. It has an initial and in-flight velocity speed of 140 m/s. The warhead has a blast radius of 3 metres, while its kinetic submunition has a launch velocity of 1,000 m/s and a penetration depth of ~ 649 millimetres.

Unlike the standard PG-42V round, the TBG-42V is exclusively an anti-personnel grenade round that relies purely on explosive concussion to inflict damage.

It has the largest splash radius out of the two grenades, and is highly effective against clustered infantry and unarmoured vehicles like the Offroad. It can also be used to raze unarmoured structures, though it will still require several rounds before a large building can be brought down.

As is to be expected, armoured ground vehicles are completely immune to the effects of the warhead since it has absolutely zero penetration capability. It can however, be used to disable the optics or RWS turrets on MBTs. Vehicles like the AFV-4 Gorgon which use exposed turrets can also be disabled with an indirect hit in this way, though it will not deal much (if any) damage to the vehicle itself.

TBG-42V grenades have an effective range of up to 500 metres and an absolute maximum of 700 metres. It has an initial and in-flight velocity speed of 140 m/s. The warhead has a blast radius of 6 metres.