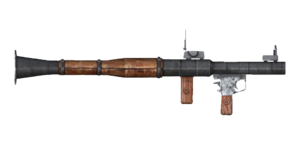 The RPG-7V is used exclusively by the SLA in ArmA: Armed Assault.

It is capable of being loaded with two types of grenade rounds: the regular PG-7V and the larger PG-7VR. Both have the same effective ranges; only the PG-7VR has a higher damage output difference. It cannot be fitted with optics and only relies on a traditional ironsight.

Despite being the sole AT launcher available to SLA forces, the only real drawback the RPG-7V has is that because it lacks any kind of guidance for its munitions or magnified optics, it cannot be used against targets beyond 300 metres (even though it has a theoretical maximum range of 500 metres).

Beyond that distance, hitting a target with any degree of precision requires a lot of practice to achieve (and a shred of luck as well) simply due to the unpredictable flight trajectory of the grenades.

The RPG-7V can load two types of grenades. Both require two inventory slots to carry:

The PG-7V's warhead is more powerful than the American M136 and also flies slightly faster (though not by much). It is best reserved for Armoured Personnel Carriers like the Stryker or unarmoured trucks due to its small blast radius and short range/underwhelming performance.

The PG-7VR is slightly more powerful than the regular PG-7V grenade. Besides this increased firepower, it is virtually identical to its baseline round in every other way. 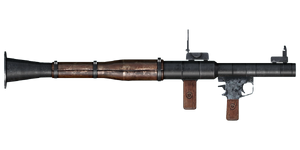 The RPG-7V is used by several BLUFOR, OPFOR and Independent factions in ArmA 2.

The ArmA 2 RPG-7V remains largely unchanged from its predecessor in Armed Assault, and is similarly intended for light anti-vehicle purposes.

It is however, capable of loading two additional types of grenades in addition to the conventional two from Armed Assault: the medium anti-tank PG-7VL and anti-personnel OG-7V grenades types.

A versatile shoulder-fired launcher that can be used against infantry and vehicles alike, one quick switch of a grenade allows an RPG-7V operator to easily become a dedicated anti-ground vehicle or anti-infantry soldier.

It is easier to carry than the heavier 9K115-2 ATGM, and packs more of a punch than the lighter (and weaker) RPG-18.

Since each round only occupies two inventory slots, an RPG-7V operator can comfortably carry up to three to four grenades at a time - with more if necessary provided they have an assistant holding grenades for them in a backpack.

The ArmA 2 RPG-7V is unique for being able to utilise four different types of grenades. Each of them have varying levels of armour penetration (in the case of the anti-vehicle rounds) and explosive power.

With the sole exception of the PG-7VR, all other grenades occupy two inventory slots:

Antiquated Soviet-era tanks like the T-34 or the T-55 can also be penetrated with this grenade, though modern Infantry Fighting Vehicles such as the M2A3 Bradley will be able to resist a few direct hits so as long as they are not struck in the rear.

It is very similar to the basic PG-7V grenade in terms of performance and weighs the same but has increased penetration against armoured vehicles. However, it is still mostly useful against light and medium armoured vehicles only, and can only inflict moderate damage if a hit is scored on the rear of MBTs.

Note that the PG-7VL has even less explosive filling than the PG-7V, so it does very little explosive damage and has a relatively tiny splash radius.

It has an effective range of 300 metres and a maximum of 500 metres. The warhead has a blast radius of just 1 metre.

The most powerful of the anti-vehicle grenade rounds, the PG-7VR is a dedicated anti-tank grenade that has the highest damage value out of the three. It is the only round that can inflict serious damage against MBTs like the M1A1 or even the T-90 regardless of where it hits, though rear shots are still recommended.

However, as the heaviest grenade out of the four the PG-7VR also flies significantly more slowly compared to the PG-7V/PG-7VL as it has an initial launch velocity of just 70 m/s, with a maximum speed of 200 m/s.

This greatly limits its effective range to just 100 metres and less, as beyond that distance targets will be extremely difficult, if not impossible, to hit with any hint of accuracy (especially against a fast moving vehicle).

The PG-7VR is the only grenade that occupies three inventory slots as opposed to two. The warhead has a blast radius of 2 metres.

The OG-7V is an anti-personnel grenade that relies exclusively on explosive damage. It has the largest splash radius of the four grenade rounds, and is highly effective against clustered infantry and even light vehicles such as the HMMWV or UAZ-469.

It is completely redundant against any kind of armoured ground vehicle, though it can be used to some effect against certain Armoured Personnel Carriers and IFVs by blowing up their wheels or tracks with a direct hit (inflicting a mobility kill), or the RWS turret and externally-fitted optics on any modern MBT.

It has an effective range of 300 metres and a maximum of 500 metres. The warhead has a blast radius of 12 metres. 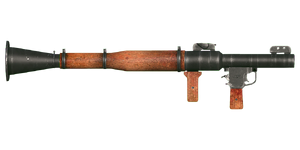 The RPG-7 is used by several Independent, BLUFOR and OPFOR factions in ArmA 3. It was added with the release of the Apex DLC.

The ArmA 3 RPG-7 is far less capable compared to its previous incarnations, and is restricted to loading PG-7V high-explosive anti-tank (HEAT) 40 mm grenades only.

It cannot be fitted with optics and instead uses a traditional ironsight that can be zeroed to launch grenades at distances of between 200-500 metres.

Designed to provide infantry with the capability to engage lightly armoured and unarmoured vehicles at ranges of up to 600 metres, the ArmA 3 RPG-7 remains as a relatively simple and easy-to-use launcher. Though it obviously lacks the flexibility of its predecessors (in terms of munitions variety), the ArmA 3 RPG-7's PG-7V grenades are fairly light to carry and only require a small backpack like the Assault Pack to store backup rounds.

However, the small diameter of the RPG-7's 40 mm grenades means that they are only strong enough to neutralise Armoured Personnel Carriers and MRAPs. They are not quite powerful enough to raze a reinforced structure or large building, and will not scratch tanks in the slightest.

The warhead possesses a kinetic penetrator but its explosive charge is extremely lacklustre, rendering the PG-7V grenade easy to neutralise by vehicle slat cages. Furthermore, multiple successive hits in an exposed area of the MBT like the engine will be required to simply disable them, not to outright destroy.

Lastly, it should also be noted that while the launcher can be zeroed to launch grenades at distances of up to 500 metres (in theory), the variable arc trajectory of the RPG-7's grenades makes it largely ineffective and very difficult to account for when used for long distance shots.

For that reason, this limits the actual maximum effective range of the launcher to just under 300 metres in practice. Beyond this distance, the RPG-7 is essentially impossible to use reliably with any degree of precision.

The RPG-7V is limited to firing only one type of grenade. It has a weight of 40 "mass" units:

The round has an initial launch velocity of 134 m/s and a maximum in-flight velocity of 300 m/s. It will begin to increase speed 0.1 seconds after launch but only requires a further 0.05 seconds of flight time to attain it.

The primary warhead has a blast radius of 3.6 metres, while the kinetic submunition has a launch velocity of 1,000 m/s and a penetration depth of 300 millimetres. 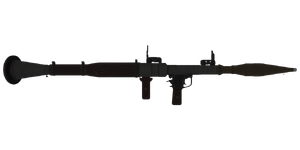 The RPG-7V1 is used by both Soviet military forces and FIA guerillas in ARMA Reforger.

Reforger's RPG-7V1 returns as the primary anti-tank launcher of Soviet forces and the FIA.

It is (roughly) analogous to the U.S. M72A3 LAW. However, unlike the LAW the RPG-7V1 is not a disposable weapon and will allow its user to reload the launcher after firing.

Just like in ArmA 3, RPG-7V1s can only load one type of grenade fitted with a high-explosive anti-tank (HEAT) warhead. It does not have a dedicated optical sight, though the ironsight can be used to aim with and allows for adjustments between a minimum of 200 m up to a maximum of 500 m (any adjustment is made with increments/decrements of 100 m).

The RPG-7V1 is limited to load only one type of grenade round:

It is launched with an initial velocity of 140 m/s. PG-7VM rounds have a maximum flight time of 5 seconds. The warhead consists of two components: the primary explosive charge, and a secondary chemical-based penetrator submunition.

The primary charge inflicts a mixture of explosive and incendiary damage. Explosive damage is inflicted to all targets with a radius of 10 metres. Incendiary damage on the other hand, only affects targets within 8 metres of the blast. The primary explosive also deals fragmentation damage and will randomly disperse up to 15 fragments in a cylindrical-shaped radius of 20 metres around the blast.

The secondary submunition is launched with a velocity of 1,000 m/s and can penetrate up to 300 millimetres of armour plating. It inflicts both kinetic and incendiary damage to the target.