The RPK-74 is a 5.45 mm light support weapon featured in ArmA 2 and ARMA Reforger. 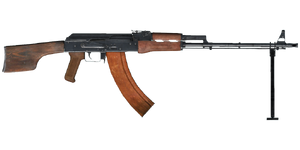 The RPK-74 is used by several OPFOR, Independent and BLUFOR factions in ArmA 2.

The RPK-74 is a gas operated squad automatic weapon that is chambered to fire the 5.45×39 mm round.

It is primarily feeds from 45-round box magazines, though it can also (optionally) load regular 30-round magazines shared with the AK-74 series of rifles and carbines.

The RPK-74 can attain a fire rate of up to 600 rounds per minute and has a muzzle velocity of 900 m/s. The RPK-74 features a (non-functional) integrated bipod but does not support being fitted with any optical sights or side rail accessories, nor can it be suppressed.

The RPK-74 is the most widely used light support weapon in ArmA 2, with the majority of factions having their automatic riflemen equipped with one by default.

Similar to its American, mercenary, and German-made counterparts, the RPK-74 serves as a light machine gun with decent accuracy over short-medium ranges. While the RPK-74 is less accurate than assault rifles like the AK-107, it compensates by feeding from 45-round box magazines instead.

However, the RPK-74's main disadvantage compared to its contemporary counterparts is its very low rate of fire. Unlike other LSW-type weapons, the RPK-74 inherits the same low RPM of its parent rifle. The other disadvantage is that it only has 45 rounds in its magazines as opposed to the 200 round belts for the M249, or the 100 rounds of the XM8/MG36.

In addition, the RPK-74's magazines occupy the exact same amount of slots, which means that the user is carrying far less total ammunition while using up the same amount of inventory space. Lastly, although it can be zeroed up to a maximum of 1000 m, the RPK-74 is restricted to just its ironsights and lacks magnified optics, rendering it difficult to see targets beyond 600 metres away.

The RPK-74 can be loaded with three types of magazines. The 30-rounders only take up one inventory slot apiece, while the 45-round magazines require two slots to carry:

The fourth round fired is always a visible green tracer, while the last four rounds consist exclusively of tracers.

30-round plastic magazine used by its rifle counterparts.

Rounds fired from this magazine specifically have a lower muzzle velocity of 320 m/s.

Pre-CCP/CorePatch RPK-74 version. Note the 75-round drum as opposed to the current 45-round box magazine. 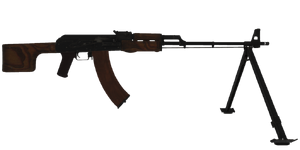 The RPK-74 is used exclusively by Soviet military forces in ARMA Reforger.

Returning in Reforger, the RPK-74 continues to feed from 45-round 5.45×39 mm curved magazines, though it can also load the AK-74's 30-rounder magazines if necessary.

Reforger's RPK-74 has a (non-functional) folding bipod but lacks support for optical sights and muzzle attachments. Compared to the AK-74, it has slightly lower fire rate of only 600 RPM. However, the RPK-74 retains a greater muzzle velocity of 943.4 m/s due to its longer barrel.

Manual zeroing is possible, starting at a minimum of 100 m up to a maximum of 1,000 m. Any adjustments are made with increments/decrements of 100 m.

RPK-74s can load four types of magazines. By default, it feeds from 45-round magazines, though these are fully interchangeable with the AK-74 assault rifle. Likewise, the RPK-74 can also load 30-rounders if needed:

Standard 45-round curved magazine. It uses a mixed load that combines both 7N6 ball and 7T3 tracer ammunition.

Tracer magazine. All forty five of its rounds consist of 7T3 tracers.

It weighs the same as the standard mixed load 45-rounder magazine.

Alternate 30-round plastic magazine intended for use on the AK-74. It is loaded with a mix of 7N6 and 7T3 ammunition (using a 25/5 split). The last five rounds of the magazine will consist entirely of tracers.

AK-74 tracer magazine loaded with 7T3 ammunition. All thirty of its rounds consist of 7T3 tracers.

It shares the same weight, inventory slot layout, and volume space requirements of the AK-74's stock 30-round magazines.