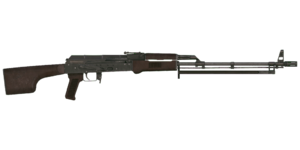 The LMG RPK-74 is a 5.45 mm light support weapon used exclusively by East German military forces in ArmA 3. It was added with the release of the Global Mobilization - Cold War Germany Creator DLC.

The LMG RPK-74 is a selective-fire, gas operated light support weapon that is chambered to fire the 5.45×39 mm round.

It loads from 45-round curved magazines but can also be fed with 30-round plastic magazines used by the AK-74 assault rifle. It can attain a fire rate of up to ~ 652 rounds per minute with a muzzle velocity of 945 m/s. The LMG RPK-74 does not support being fitted with suppressors or bayonets, but can mount optical scopes and night sights. Additionally, it utilises an integral folding bipod.

Compared to the 7.62 mm-chambered LMG RPK, the LMG RPK-74 has the same amount of recoil, retains a similar effective firing range of between 400-500 metres, and also features a folding bipod.

The LMG RPK-74's upsides lie in its higher fire rate of ~ 652 RPM (versus the LMG RPK's 600) as well as the weapon itself being easier to carry - a benefit of it using the lighter 5.45 mm cartridge. Furthermore, the 5.45 mm round has greater reach and accuracy. Combined with the RPK-74's longer barrel, this allows it to reliably hit targets as far as 700 metres away.

However unlike the 7.62 mm LMG RPK, the LMG RPK-74's 5.45 mm round is quite lacklustre and doesn't retain as much stopping power against armoured targets. Its magazines also contain 25 less rounds while weighing the same as the LMG RPK's 75-round drums, rendering its magazines highly inefficient stamina-wise.

Overall, choosing between the 5.45 mm/7.62 mm RPKs is dependent on mission requirements. The 5.45 mm RPK is better for both close quarters and long range (and being less of a pain to carry), while the 7.62 mm RPK hits harder and stores more rounds per drum but places a heavier burden on the user's stamina.

NOTE: The LMG RPK-74 can load the same magazines utilised by non-Global Mobilization 5.45 mm-chambered weapons. To minimise clutter, they are deliberately excluded from this section.

The LMG RPK-74 can load eight types of magazines; four are standard 45-round curved magazines and the remainder are 30-rounders shared with the AK-74 rifle.

The 45-round magazines weigh a total of 18.35 "mass" each while the 30-rounders only weigh 12.24 "mass". All are available in either Orange or Plum colour schemes: