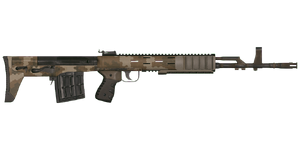 The Rahim is a gas operated, selective-fire designated marksman rifle that is chambered to fire the 7.62×54 mm round.

It loads from 10-round curved magazines and has a muzzle velocity of 830 m/s. It accepts accessories on both its top and underbarrel rails, and can mount attachments onto its muzzle.

The Rahim uses a bullpup layout which makes it a relatively compact weapon to wield. It is the lightest weapon out of all the DMRs and has fairly decent accuracy for both medium-long ranges.

In addition, the Rahim boasts an impressive fire rate of 652 rounds per minute. In practice however, it should be noted that the Rahim is extremely difficult to control while firing in full auto. Combined with its meagre magazine capacity, this renders the Rahim's high fire rate rather redundant and essentially impossible to achieve under regular circumstances.

Two other (albeit minor) drawbacks that the Rahim has is that its dust covers cannot be removed, and that its muzzle velocity is slightly less than that of other DMRs like the Mk18 ABR. For the former, the Rahim faces the same problem as the CMR-76 and can't mount side rail accessories like a laser pointer which - depending on the user's needs, could prove to be a detriment.

In the case of the latter, the Rahim's 7.62 mm rounds will lose their energy slightly quicker than the Mk18 ABR, though it is fortunately somewhat compensated by the Rahim's excellent accuracy. However, it falls well short of the SPAR-17 and does not come close to being able to match the Mk-I EMR's range.

The Rahim can only load one type of magazine. It has a weight of 8 "mass" units:

Curved mag with 7.62 mm ball ammunition. Does not have any visible tracer rounds loaded.

Early development teaser of the Rahim shown prior to the campaign's first episode.

Another teaser, this time including a concept render of the To-199.